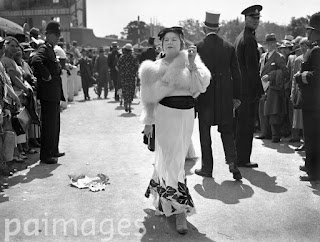 Royal Ascot got under way in fine weather conditions allowing a healthy parade of the latest fashions above all in the Royal Enclosure. The photographers had a field day. The Royal family were absent because the Court was still in mourning for George V so the traditional procession of Royal carriages along the course did not take place which somewhat detracted from the spectacle.


One visitor, though, did travel in a carriage provided by the Royal household but was unmolested by the newspaper photographers. Whilst it went entirely unreported in the press, the presence of Mrs. Wallis Simpson was soon widely known in the higher reaches of society. Ramsay MacDonald,  a member of the Cabinet and former Labour Prime Minister turned frequenter of ducal salons, was appalled at what he saw as the parade of an unworthy mistress.It appeared to be the next step in her social promotion after her shocking appearance in the Court Circular the previous month.