A Scolding Archbishop and a Talking Mongoose 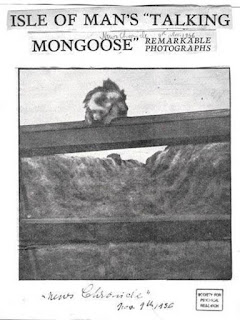 The dust was only just settling after the abdication when the Archbishop of Canterbury weighed in with a radio broadcast, in which he bemoaned the fact that the ex-King had put his personal happiness before his duty and, worse, “Even more strange and sad it is that he should have sought his happiness in a manner inconsistent with the Christian principles of marriage, and within a social circle whose standards and ways of life are alien to all the best instincts and traditions of his people.” It was widely seen as a spiteful attack the former Edward VIII, but was appreciated at Downing Street where tolerance of Mrs. Simpson had sunk to a low level. On a more positive note, the new King George VI in an early statement of policy for the new reign, promised that the Royal racing stables would be conducted in the same manner as his father, George V, had done. The non-reference to the intervening sovereign told its story.

International affairs brought little beyond the grim diet of news of the siege of Madrid and an abortive coup in China. More in keeping with British tradition was the report into the Lambert/Levita affair, which combined ineptitude, disguised authoritarianism and outright lunacy. Rex Lambert, the editor of the BBC’s The Listener had sued a retired colonel for suggesting he was insane because he had published an article about a house haunted by a talking mongoose. His action succeeded, but not before the higher management of the BBC had tried to persuade him to drop it on the great British precept of “not rocking the boat”. Predictably the inquiry ruled that Lambert had not been persecuted, but did recommend that a formal code of conduct should govern management/staff relations.