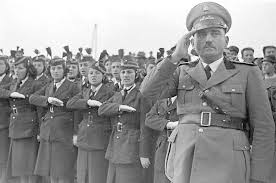 To prove that he was just as capricious, aggressive and unbiddable as Hitler, Mussolini invaded Albania on Good Friday. Hitler had not informed him in advance that he was going to occupy the remainder of Czechoslovakia three weeks before, so this was Mussolini’s way of demonstrating that he was of equal standing. There was no serious military opposition and King Zog was deposed. Zog, who was Albania’s one and only king ever, had no particular legitimacy beyond being the dominant tribal chieftain but his wife had just given birth to an heir, practically guaranteeing international sympathy. Zog had devised the "Zogist" salute, easily the least successul of the various political gestures promoted during the 1930s. Otherwise Zog is only famous for his epic tobacco habit: put at 200 cigarettes per day. Albania was already an economic dependency of Italy so the invasion made little sense beyond giving Italy control of the Adriatic Sea which proved to be of limited military value during the Second World War. The invasion dealt another blow to Chamberlain’s policy of appeasing Fascist dictators and led to the first British Cabinet meeting on a Bank Holiday since the First World War.

The Luftwaffe surged to the forefront of clean living with a clamp-down on drinking alcohol and, a bit, on smoking. This was in response to an improbable speech by Robert Ley, the head of the Reich Labour Front decrying these vices. Ley was generally regarded as an alcoholic. Field Marshal Goering, who issued the relevant order, was not a noted ascetic either. New bars serving alcoholic drink were banned at messes for all ranks. Existing ones were barred from serving foreign drink. The custom of “boot drinking” was as forbidden. This was a Jenga-style drinking game. A very large glass drinking vessel in the form of a boot was filled with beer and passed around a group of comrades, each drinking in turn. The penultimate drinker was expected to pay for the next round.

The IRA issued a communiqué about its bombing campaign in mainland Britain, partly to commemorate the Easter rising on 1916. This was being conducted by an “expeditionary force” but did not aim to cause civil war or provoke a coup d’état in Ulster or all of Ireland. Nothing was said as to what the campaign was supposed to achieved. The absence of fatal casualties in the campaign so far was noted but the communiqué claimed this was “conditional” on no “extraordinary” measures being taken. The reader was left to judge what “extraordinary” measures might mean.