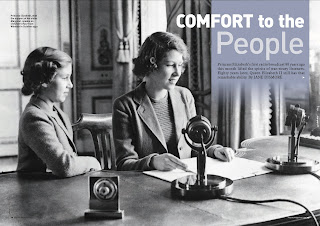 Princess Elizabeth, today Queen Elizabeth, made her first broadcast on BBC Children’s Hour at the remarkably early age of fourteen, opening a mdeia career that runs to this day. It was a considerably happier event than her uncle’s broadcast explaining his abdication four years before. The programme ushered in a new feature on the BBC North America service aimed at children who had been evacuated from Britain to escape bombing and the threat of invasion and now had to face a lonely life without their parents. She addressed her audience as fellow regular listeners to Children’s Hour. Inevitably the content barely rose above platitude but it was delivered well and demonstrated how artfully the Royal Family was being mobilised for the war effort. The "little princesses" had been a staple of adoring press comment during the 1930 as the model of an attractive young family, in implicit contrast to the louche demeanour of the Prince of Wales, later (briefly) Edward VIII. Elizabeth's ten year old sister Princess Margaret Rose was allowed to contribute the words “good night.”

A Parliamentary inquiry was opened into the conduct of MP and junior food minister, Bob Boothby, in what came to be known as the “Czech Assets” affair. In 1939 whilst out of office, he had campaigned for the compensation of owners of assets blocked in Czechoslovakia by the German invasion, without disclosing that one of them – in this case a very substantial claimant - had agreed to pay him 10% of money recovered. The facts had been known for more than a year in Whitehall but Boothby’s enemies had bided their time. The most powerful of these was Sir Horace Wilson, Head of the Civil Service and former intimate adviser of Neville Chamberlain as prime minister, who loathed Boothby for his opposition to appeasement and support of Winston Churchill. He had been Churchill's PPS in the late 1920s and one of the tiny band of MPs to stay loyal to him in the worst of his wilderness years. Boothby had laid himself open to further attack when he had used his ministerial position to lobby for the addition of extra Vitamin B in bread. He owned part of the British subsidiary of Hoffmann-LaRoche, monopoly supplier of the supplement.

The Blitz ground on with continuing heavy raids on London. One of these had severely damaged the offices of The Times newspaper on Printing House Square a couple of weeks previously but the news was not published immediately for fear of giving the Luftwaffe some indication of the accuracy (or otherwise) of its bombing. The trademark clock visible from Queen Victoria Street was destroyed but production of the newspaper was not severely impeded. Churchill wrote a letter of commiseration to Major Astor, the paper’s owner. Given that the paper was still edited by Geoffrey Dawson who had unremittingly supported appeasement, there might have been an element of hypocrisy here.

Charlie Chaplin’s film The Great Dictator which lampooned the Fascist dictators under the names Adenoid Hynkel and Benzino Napoloni was released. The somewhat weak plot drew on the resemblance between the dictator and a Jewish barber, both played by Chaplin who famously had long sported the same toothbrush moustache as Hitler. The distributors were taking something of a risk in the US where isolationism was still strong and the film’s focus on Nazi anti-semitism ran the risk of making opposition to Fascism seem to be an overly Jewish cause.  Chaplin had also been nervous that the British public would be out of sympathy with another reminder of the war but they relished the humorous assault on their enemies’ leaders. It was to become one of his greatest commercial successes.