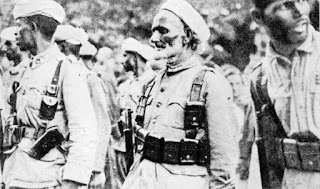 Soviet justice showed its usual promptitude and resolution in passing death sentences – rapidly carried out – on 13 of the 17 defendants in the latest trial of Trotskyists and wreckers and foreign agents in Moscow. Karl Radek was one of the defendants spared, in part because his testimony established the existence of a sinister “third Organization” training Trotskyite cadres to perform its pernicious work. He denounced "semi-Trotskyites, quarter-Trotskyites, one-eighth-Trotskyites, people who helped us, not knowing of the terrorist organization but sympathizing with us, people who from liberalism, from a Fronde against the Party, gave us this help". In Nazi Germany the bar for culpable Jewishness was set at one quarter, Trotskyism was clearly one degree more insidious. Even the US ambassador believed that the trial had been conducted fairly.

Against the background of the sad attempts by France and Britain, to restrain the flood of German and Italian “volunteers” (in reality formed, regular military units) into Spain to fight on the Nationalist side, the Spanish Republican government took the opportunity to make a telling debating point, which was lost in a wave of indifference and unspoken condonement of the Nationalists: the Moorish troops fighting for Franco should be caught by the blanket ban on foreign volunteers promoted by the western powers. The Moors were not, of course, volunteers, but semi-mercenary colonial levies, who contributed vastly to the brutality of the Nationalists’ campaigns, but facing uncomfortable truths about Spain was not a popular activity in Paris or London.

King George VI knighted Walter Monckton, his elder brother’s lawyer, who had played a critical intermediary role in the abdication crisis was now serving the new king in the same capacity as well continuing his task as intermediary between the brothers under circumstances scarcely less delicate. Monckton was entirely straightforward and motivated by desire to do the best for his country and the individuals involved, but his position was emblematic of the extent to which the British establishment had closed its ranks against the former King .