Showing posts from May, 2019
Show All

Eighty years ago, the currents of Imperialism and appeasement combine, as the cross-currents within Labour sweep it to irrelevance

King George VI and Queen Elizabeth reached the west coast of Canada, the turnaround point for their tour of the Dominion, the first ever by a reigning monarch. Canada had long been a rite of passage for the heir to the throne, but now the Canadians were getting the real deal. Perhaps because of this, the spin machine went into overdrive to play down the importance of the upcoming US leg of the North American tour: “a four days' diversion with a friendly neighbour.” Certainly there had been sceptical articles in some Canadian papers as to their Majesties’ true priority, but the presence in the Royal suite of a particular spin doctor invites another explanation. George Steward was taking time off from his normal task as 10 Downing Street’s press liaison for the Canada trip. Steward was a staunch supporter of Neville Chamberlain’s exclusively bilateral Anglo-German solution to European tensions; a solution that firmly excluded any thought of meddling by the US, which would hav
Post a Comment
Read more 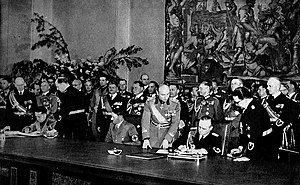 The German and Italian foreign ministers, Joachim von Ribbentrop and Galeazzo Ciano, signed a formal, ten-year   alliance between the two countries in Berlin. This had long been a goal of German diplomacy, tying the Italians to joint military action should either power find itself at war. Secret clauses provided for military and economic cooper ation. Article II, however, provided for consultation between the countries in the event of a crisis and was to be used as an escape clause by the Italians, the following September. Hitler’s failure to consult with the Italians over the invasion of Poland served as a pretext for Italy to remain neutral. Neither Ribbentrop nor Ciano were noted for their honesty, so it is hardly surprising that the operation was marked by bad faith. With an eye to propaganda rather than substance, Mussolini christened the agreement the “Pact of Steel” as a more catchy label than the official “Treaty of Friendship and Alliance.” His early proposal of the “Pa
Post a Comment
Read more 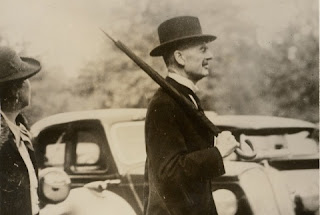 Neville Chamberlain set out his latest thoughts on policy to the unchallenging audience of the Conservative Women’s Associations . He was able to draw laughs with a reference to his taking the “old umbrella around again”, promoting his self-image as Europe’s travelling peace-maker, armed with his trusty “defensive weapon.” He was clearly unaware that Hitler had developed a violent dislike of the bourgeois, democratic “umbrella men” who sought ineffectually to restrain him, Chamberlain above all. Nothing in Chamberlain's speech was likely to change Hitler's belief that he had fully got the measure of the British prime minister. Chamberlain assured his listeners that measures such as the introduction of conscription were aimed at protecting Britain from attack, and nothing more menacing than that. He hoped that the Danzig issue could be settled by discussion and the closest he got to a threat was to state that if Germany attempted unilateral measures, this would start “a
Post a Comment
Read more
More posts