Eighty years ago, the League of Nations erects its own tombstone 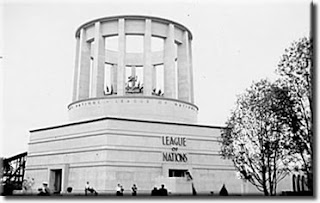 Joseph Avenol, the Secretary General of the League of Nations, threw a switch in Geneva which turned on the lights at the organisation's pavilion at the World Fair that was opening in New York. His PR man read out a speech on his behalf. The speech set out the League’s difficult work at a time when “when those who threaten the public peace are bolder than those called upon to protect it.” The speech also admitted that it was “perhaps a bold thing in a period of chaos and anguish and dread of a disastrous war to set up a monument to the League of Nations.” The monument might as well have been the league’s tombstone.* Avenol could not attend the opening because the League was deeply, and mainly passively, involved in the Danzig crisis that would lead to the outbreak of war. The Free City of Danzig had been  administered under a League mandate since the Treaty of Versailles, providing Poland with its only significant access to the sea, but Hitler’s next goal was to bring Danzig back into Germany’s full possession.

The French government had flagged its desire for friendship with Franco’s regime in Spain after his final victory in the civil war, but he was not above sending a signal that the past relations between the two countries had not always been so friendly. The Second of May was reinstituted as a national holiday. It commemorated the dos de mayo, the huge spontaneous uprising of the people of Madrid against Napoleon, who had just overthrown Spain's legitimate King and put his brother on the throne. The uprising was suppressed with extreme brutality and inspired Goya’s painting of the same name.

Maxim Litvinov was sacked as Soviet foreign minister and replaced by Vyacheslav Molotov. Molotov had long detested Litvinoff, for his cosmopolitan knowledge of foreign languages and because he was Jewish. Litvinoff was a representative of the old Bolshevik who had steadily been pushed to the margins of public life by Stalin. Molotov had supported Stalin since early in his career and was blindly loyal. The arrival of Molotov ushered in a brutally pragmatic phase in Soviet foreign policy. Discussions on some form of alliance with Britain continued, but via Molotov, Stalin was open to other offers. When asked why was dismissed, Litvinoff later said, “Do you think I was the man to sign a treaty with Hitler?”