Showing posts from May, 2022
Show All

Eighty years ago, before the Wagatha sting there were the code-breakers of OP-20-G

In a stroke worthy of Coleen Rooney, the US Navy's code-breakers resolved a furious debate over where the next Japanese stroke would be directed. The JN-25 cypher had been broken and revealed that "AF" was the next target, but the USN high command was convinced this meant the Aleutian Islands in the north Pacific, but the code-breakers of OP-20-G believed it was Midway Island in the central Pacific. Code-breaker Jasper Holmes had the inspiration of instructing the Midway garrison to send an emergency plain language message saying that the island's desalination plant had been wrecked. The Japanese duly signalled in JN-25 that "AF" was short of water, putting it beyond doubt where they were going to attack. The Soviet forces that had landed on the Kerch Peninsula in Stalin's scheme to relieve the siege of Sevastopol were in increasingly dire straits, entirely cut off and dependent on sea supply for everything. They were doomed when the Germans launched
Post a Comment
Read more 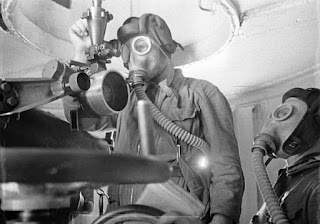 Rumours that the Germans might use poison gas on the Eastern Front had been common for some months. The Soviets expressed their concern to the British; it was a topic on which they were unusually forthcoming. Churchill privately informed Stalin that he would treat the use of gas against the Soviets as though it were being used against Britain. GCHQ decycphered an ambiguous and non-urgent messsage suggesting that a gas attack might be under preparation. This was enough for Churchill to give the same commitment in a public speech that he had given confidentially. In practice he was warning Hitler that the RAF would drop gas bombs on German cities in retaliation. The British were worried enough at the possibility that either side might use gas on the Eastern Front to risk compromising the secrecy of Ultra intelligence. The US Navy concentrated its aircraft carriers to blunt a Japanese thrust into the Coral Sea that threatened  the vital port of Port Morseby on New Guinea, which could have
Post a Comment
Read more

The Luftwaffe launched what proved to be the last sizeable air raid of the Baedeker Blitz on historical towns. Forty or so bombers attacked Exeter killing 136 people and inflicting considerable damage, notably to the cathedral. This would have been worse but for presence of four Beaufighter radar-equipped night-fighters of 307 (Polish) Squadron, City of Lvov, which shot down four of the raiders before they could drop their bombs. It was a daunting loss rate for the attackers (and an impressive success rate for the defenders) and showed that the attrition cost of these chiefly vandalistic operations far outweighed any military value when the Luftwaffe was already hugely over-stretched. It was also an illustration of what radar-equipped fighters could achieve against night bombers and would soon be be inflicting on RAF bombers over Germany. Hitler and Mussolini met at the luxuriously appointed Schloss Klessheim in Austria. The conference consisted mainly of monologues by the Fuehrer, b
Post a Comment
Read more
More posts