Eighty years ago, the first reigning British monarch sets sail across the Atlantic 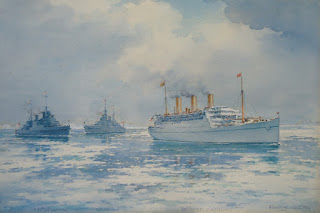 Poland’s Foreign Minister and the strong man in its government, Colonel Beck, spoke to the parliament, the Sjem, setting out a response to Germany’s repudiation of the 1934 non-aggression pact between the countries. The Anglo-French guarantee issued to Poland had provided the Germans with a pretext to cancel the agreement. Beck’s tone was moderate and he held open the possibility of negotiation with Germany over Danzig and the Polish corridor, the strip of land that separated Danzig from the Reich. Awaiting directions from on high, the German press made minimal comment on Beck’s speech, but it did pick up a stray reference in the British parliament. In response to a question, Rab Butler, the junior foreign office minister and a determined advocate of appeasement, promised British “good offices” in any negotiation. Under the headline “Runciman in sight”, German papers suggested that the British commitment to protecting Poland was less robust than it might have appeared. It was Lord Runciman who had led the British “mediation” mission to Czechoslovakia the previous year, which supported the German-speaking Sudeten claims almost unreservedly.

King George VI and Queen Elizabeth set sail for a historic visit to Canada and the United States. The order in which the two countries were mentioned reflected, first, the order in which they were to be visited and, second, that this was an imperial occasion. Just in case anyone had not been paying attention, they sailed on the Empress of Australia. They might have been travelling on a civilian liner, but they were accorded a naval and air escort as they left Portsmouth: the RAF as far as the Needles and two cruisers all the way across the Atlantic. The USA had been neglected in British diplomatic activities for some while, so the royal visit provided a chance for a powerful symbolic gesture of friendship. This was not only the first time that a reigning British monarch had visited Canada, but the first time that one had ever gone to North America at all.  The, by-then, Duke of Windsor had often visited as Prince of Wales and shown his openness to things American in other ways, but this was far more telling.

The legend that Nazi autobahns provided a zone for individuals to drive purely as their own judgement dictated untrammeled by government nannying, received a severe knock. By personal direction of the Führer himself, nationwide speed restrictions were introduced for all roads, autobahns included. Cars were limited to 60kph in towns and 100kph on open roads. This was explained by both road safety and fuel economy. Autobahns had tempted drivers to go at speeds of 150kph and more, with sometimes disastrous consequences.