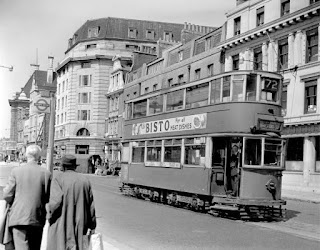 The Coronation celebrations had proceeded in the face of a bitter and prolonged strike by London’s busmen. A meeting at the headquarters of the Transport and General Workers’ Union voted to continue the strike but made plain the divisions within the labour movement that it had thrown up. The T&GWU was only notionally the busmen’s representative. In reality the strike was being driven by elements very far to the left, notably the “Rank and File” committee. The busmen were trying to bring the trolley bus and tramway workers out in sympathy but the union’s official leadership was firmly opposed. Ernest Bevin, the general secretary of the T&GWU, was resolutely anti-communist firmly blocked any union support for extending the strike to other transport workers. The busmen were on their own.

On the other side of the Atlantic another bitter industrial dispute presented almost a mirror image with “independent” steel producers holding out against – depending on your stance – union recognition or the closed shop. Two producers with 78,000 workers in the State of Ohio were confronting the CIO on the issue. Drastic action was brewing. The steel makers were laying in stocks of food at their plants in anticipation of a de facto siege by pickets, which would prevent non-striking workers from reaching their work.

The divisions within the Spanish Republic’s “national” government in Valencia never reached the open civil war suffered in Catalonia but they were savage enough. The vaguely centrist government of Largo Caballero finally succumbed and was replaced by one under Moscow’s candidate, Juan Negrin, the minister of finance. Weirdly Negrin’s avowedly authoritarian approach to government was applauded by right wing figures such as Winston Churchill, who failed to detect that Negrin’s agenda went further than controlling anarchist elements. But for this misunderstanding it would have been clear that the Spanish Republic was now dominated by Stalinist forces.