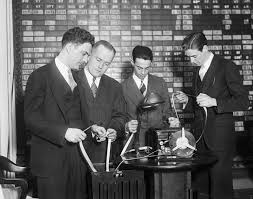 Hans Frick, the Nazi German interior minister, made a speech that practically issued a prospectus for the Sudetenland crisis of the following year that was to lead to the Munich agreements. He stated that the time had come to settle the question of German speaking minorities in eastern European countries, in particular the large Sudeten minority in Czechoslovakia. Ominously he asserted that their future was tied up with Germans of the Reich itself. The German minorities were described as deserving special treatment because they were  “factors of order, constructiveness and loyalty”, which rather begged the question of where their loyalty lay. It also contained the suggestion that they were somehow superior to the majority, essentially Slavic populations.

British policy in Palestine was subjected to detailed questioning by the League of Nations Mandates Commission in Geneva. When it was put to William Ormsby-Gore, the British Colonial Secretary, that there was no clear policy as to the future, he elegantly played back the flimsy justification for British involvement, in practice rule: the mandate of the League itself. This, he claimed, meant that the League had to bear part of the responsibility. A British Royal Commission had advised partition into Jewish and Arab states and Orsmby-Gore rather thought that this would be the ultimate outcome, ignoring the fact that the World Zionist congress, also meeting in Geneva, had just voted against the proposal.

Dubious share offerings were costing British investors an estimated £5m per year and the Government set out its plans to act. The “share pushers” forerunners of today’s Boiler-room operatives were to be curbed by insisting that only specially registered businesses were to be allowed to sell shares to the public. The threat of removal from the register alone was supposed to provide a sufficient deterrent against misconduct. Sceptics noted that the report did not cover the City of London, home to "reputable issuing houses" and concentrated on the Provinces. It was well received in mainstream financial circles.