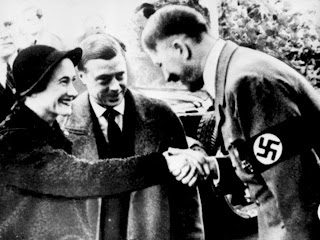 Nazi Germany’s march towards autarky and the abandonment of any semblance of market economy became plain to the world as the rift between Hjalmar Schacht, former central banker now Minister of Economics, and a regime uninterested in conservative economic management leaked into public consciousness. The trigger for the dispute were the synthetic oil and fabrics production programmes driven on by Herman Goering as Commissioner of the Four Year Plan. These were not paying propositions but designed to replace imports that would be prevented in wartime. The rumours of Schacht’s resignation were only a couple of weeks premature.

The visit to Germany by the Duke and Duchess of Windsor culminated in tea with the Führer himself at Berchtesgaden. Hitler was favourably impressed with the Duchess and rather thought she would have made a good Queen unlike almost the entire British establishment. Predictably enough this meeting unleashed extensive criticism which was still well under way when the next part of his programme to relaunch his status as a public figure began to attract hostility. On the same feeble pretext of investigating labour conditions he had deployed to explain the tour of Germany, he was to go to the US. Any shred of credibility this explanation might have had was destroyed by the fact that the organization of the tour was put in the hands of Charles Bedaux, who made his fortune from a brutal time-and-motion system that marked him as a committed ally of capital and enemy of labour. The Duke was forced to publicize Bedaux’s involvement to fend of claims that the visit had been professionally organized as. In fact a commercial PR firm had been taken on to manage press coverage of what was supposedly a private visit. The whole exercise was becoming a catastrophe, doing far more damage to the Duke’s reputation than any imaginable benefit.

The fall of Shaghai’s industrial suburb of Chapei provided an ugly lesson in the reality of the Japanese offensive in China. Within easy distance of Shanghai’s still extensive Western population, Chinese civilians were slaughtered en masse. Terrified refugees were stopped from entering the extra-territorial western “concessions.”