Eighty years ago, Germany takes another step towards a war economy, Franco puts killing Republicans ahead of battlefield victory and Palestine erupts into bloodshed again 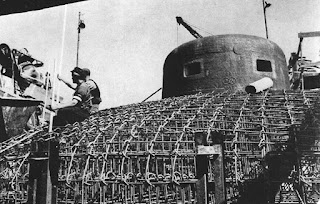 Germany’s transformation into a state-planned autarkic economy took another major step with the introduction of labour conscription. The construction, steel and metal-working industries were to have the first claim on conscripted workers. Other industries were to be ranked in descending order of importance with Herman Goering as Commissioner for the five year plan having the final say. Exporting industries were to have some privileges but this was clearly a move towards mobilisation for war conditions; the construction industry, of course, embraced the massive efforts being made to construct the Westwall fortifications along the border with France.

The weakened Republican forces in Catalonia were in a poor position to resist a focused Nationalist drive on Barcelona which would probably have spelled the end of the campaign in the East. Franco’s German advisers pushed him to adopt this strategy but he refused and broadened the offensive to create a broad corridor to the sea. There was little strategic rationale for this but a prolonged slogging match would grind down the Republican troops using the Nationalists growing superiority in heavy weapons and air power. Making sure that his opponents would never be able to challenge him again was more important to Franco than a quick victory.

The fragile truce had lasted a few months in Palestine but now practically broke down. Violent incidents including targeted killings and bomb attacks erupted across the region. Both Jews and Arabs were involved in what seemed to be largely spontaneous acts. A curfew was declared.