Eighty years ago, the Final Solution gets under way and the neutral monarchs of Europe try to ward off the inevitable 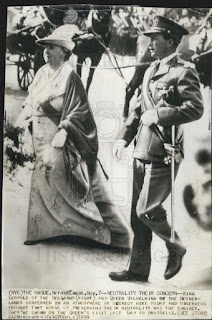 The two neutral countries most at risk from the possibility that the Phony War would turn live were Belgium and the Netherlands, and they were acutely aware of this. Both were monarchies and their respective sovereigns gave ample proof that both countries were acutely aware of the dangers in a last hurrah for royal diplomacy in Europe. With little preparation or prior announcement Queen Wilhelmina of the Netherlands, who was credited with having helped preserve her country’s neutrality in the First World War, travelled to Brussels for discussions with King Leopold of Belgium. In part inspired by German troop movements on their common frontier, the Netherlands had begun precautionary preparations against invasion. The two sovereigns sent a joint telegram to the leaders of Britain, France and Germany offering to mediate a settlement. It made no mention of any possible base for an agreement and rather treated the warring powers as equally responsible for the conflict; there was no suggestion that Germany might restore Poland’s independence. Scenting a device to support its depiction of the western powers as the war mongers, the German foreign office offered polite encouragement.

The Nazi regime began to give a hint as to the part that Poland was to play in its projects for the future. It began to deport those Jews who had failed to escape from Germany to the region around Lublin. They were given minimal time to prepare and all their possessions were confiscated. The Nazis maintained the pretence that the Jews would ultimately be allowed some authority in the new mega-ghetto, but the Germans were clearly in charge. Apart from medical doctors, who could still  practice, the only work permitted was agricultural labour.

The British public were given a sense that the Phony War might be a rather gentler experience than had seemed at the start. The period of black-out was shortened by one hour in response to please from trade unions and employers. The appalling surge in deaths from road accidents might also have played a part. Henceforth the black-out would begin thirty minutes after sunset and last to thirty minutes before sunrise.