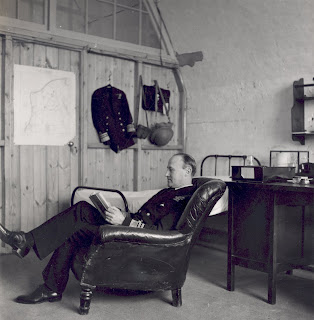 The change in government and the growing military debacle in France triggered major changes at the top of the British Army. General Sir William ("Tiny") Ironside was moved from being Chief of the Imperial General Staff to command of home forces. Ironside was, and was seen as, a battlefield soldier so the demotion from the top job in the army after a brief tenure was not in itself a disgrace. Ironside would anyway by far have preferred the command of the BEF to being made CIGS. Moreover the move flagged a clear expectation that his fighting skills would be required to meet a German invasion. He was succeeded as CIGS by General Sir John Dill who had been commander of home forces before the war and was rather seen as having been passed over for the top job then. Both men were near retirement age and neither appointment was set to last.

Amidst great constitutional acrimony King Leopold of Belgium took personal command of the Belgian armed forces  and surrendered them unconditionally to the Germans three days later. He had no contact with his ministers during that time. His move was widely attacked in Britan but it was of little practical significance. The Belgian army was doing little to hold up the German advance.

The Germans paused long enough in their advance on the French coast for the British and French to establish a line of defences around the port of Dunkirk. The precise motives have been long debated. Certainly Goering claimed that the Luftwaffe on its own was capable of destroying the forces trapped in the pocket but the formal order was soon rescinded. The British counter-attack at Arras had put the Germans on their guard and the sacrificial defence of Calais also absorbed German attentions.

The British were able to use the breathing space to put in place arrangements to evacuate as many of the British and French troops trapped in the pocket. By a stroke of providence Bertram Ramsay the admiral in command of Dover was a first rate organiser and had anticipated the need for just such an operation.  He and his staff put Operation Dynamo together from scratch with no formal planning from tunnels beneath Dover Castle. At first no publicity was given to the fact that a full scale evacuation was under way.

The expectation of a German assault on Britain led to the detention without trial under Regulation 18B of a number of individuals considered to be potential threats to security. Most famous of these was Sir Oswald Mosley, leader of the British Union of Fascists, together with eight of his colleagues. Other figures not directly connected with the BUF were arrested, notably a sitting MP Captain Ramsay.

Churchill had been strikingly merciful to the major figures in Chamberlain's appeasement government but not so the deeply unpopular Sir Samuel Hoare, who was not offered a ministry in the new government. Instead he accepted the post of ambassador to Spain. At that point it was not as important as it was to become after the fall of France a few weeks afterwards. The job played to the strengths Hoare had developed as a senior British intelligence representative in Rome at a point when the Italian commitment to the war against Germany was wobbling. He channeled secret funds to Mussolini, who was agitating in favour vigorous prosecution of the war.