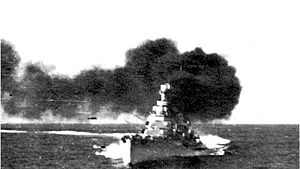 The Italian navy attempted to repeat its success of mid November in forcing back a heavily escorted British convoy sent to reinforce Malta. This time the Royal Navy could call on far greater resources including Force H from Gibraltar under Admiral Somerville, including the old battleship HMS Ramillies, battlecruiser HMS Renown and the aircraft carrier HMS Ark Royal. The Italian force was comparable in size, including the battleship Vittorio  Veneto; shore-based aircraft evened out presence of the British carrier.  The resulting engagement was the inconclusive Battle of Cape Spartivento. The Italians were under orders to avoid fighting a powerful enemy force and withdrew when the size of the odds became apparent. No ships were sunk but one cruiser on each side was badly damaged. Churchill was furious that there had not been a more conclusive engagement and suspected Somerville of lack of aggression, partly because of his reluctance to attack the French fleet at Mers el-Kebir the previous summer. He was exonerated by an inquiry conducted by Admiral Lord Cork and Orrery.

What came to be called the Battle of the Atlantic was beginning in earnest. The Germans sank more merchant ships than in any previous week of the war: 22 vessels with a total of almost 90,000 tons.  This was still well below the levels sunk at the worst of the U-Boat campaign in the First World War but was only a foretaste of disasters to come. With the whole French Atlantic seaboard at its disposal Admiral Dönitz’s force was hugely better positioned. The British public were warned that further food rationing was only a matter of time.

After a brief pause, the night time Blitz resumed with a vengeance. London was hit again but the biggest sufferer was Southampton. With a major port and the Supermarine Spitfire factory the city was a target of great military importance. Much of the centre was severely damaged although casualties of around 400 were smaller than they might have been. Morale was badly hit and the normal bus services were overwhelmed by people trying to flee to the surrounding countryside.

Despite severe snowstorms the Greek army continued to push the Italians back in Albania. The terrain was mountainous which the Greeks continued to use to their advantage, capturing the heights and bombarding the Italian garrisons beneath. These included the town of Pogradets which was abandoned leaving a large volume of supplies to the attackers. One of the peaks taken by the Greeks rose well  over 2,000 metres. On their left flank they reached the Adriatic sea, cutting off one of the smaller ports through which the Italians could bee supplied.