Eighty years ago, Nazi bombs are not allowed to interrupt British democracy 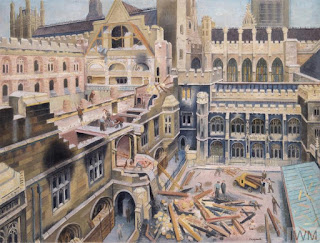 Over two nights London suffered its last major air raids of the Blitz. Immense damage was inflicted; one third of streets were impassable and all but one main railway station was out of operation for weeks. The first night was the more lethal with over 3,000 casualties, almost half of whom were fatal. But it was the damage done of the second night which had the greater symbolic resonance. Incendiaries fell on the Palace of Westminster staring major fires. The Fire Service did not have the resources to save everything and, as had happened in the fire of 1834, it was decided to save Westminster Hall and sacrifice the Commons Chamber, which was burned out. Sittings of Parliament were not interrupted and continued in temporary accommodation at Church Hall nearby. Parliament’s influence on affairs was by then insignificant but it would have been unacceptable to allow German bombs to suspend the workings of democracy.

Stalin performed his last piece of appeasement. The Soviet Union withdrew its recognition of three German occupied countries on the grounds of their “loss of sovereignty”: Yugoslavia, Norway and Belgium. The two last were a smokescreen for his brutal volte face over Yugoslavia, whose short-lived anti-Axis government which had taken over after the coup which deposed the Regent had been fleetingly supporting by the Soviets. Stalin hoped to expunge the appearance of having indirectly opposed Hitler. The hope was in vain; the German invasion of the USSR was only weeks away.

The imminence of Operation Barbarossa was the trigger for one of the war’s weirdest episodes. Germany’s deputy Führer, Rudolf Hess, flew himself to Scotland in a long-range Me110 twin-engine fighter, on what he fancied was a peace mission. He had persuaded himself that the Duke of Hamilton, a serving RAF officer, was an influential figure who would be favourable to such an attempt. Hess had become a marginal figure in the Nazi power structure, his political capital as a fellow prisoner of Hitler at the Landsberg prison after the beer-hall putsch, had long eroded. The relatively muted British reaction helped inspire all manner of conspiracy theories afterwards, but was only a mixture of genuine bafflement at Hess’s move and the difficulty of identifying any paying strategy to exploit it.

The Me110 also featured in one of the Luftwaffe’s more exotic operations. Germany was naturally anxious to support Rashid Ali’s pro-Axis, nationalistic and anti-British coup in Iraq and negotiated Vichy French permission to send assistance through Syria, which remained loyal to Vichy. The quid pro quo was the release of those French prisoners of war in Germany who had served in the First World War, a small dent in the vast numbers held, whose continued imprisonment was a constant advertisement of the fact that the balance of power in Franco-German relations lay firmly with the Germans. A hastily assembled group of Me110s and Heinkel 111 bombers flew to Mosul in the north of the country where they operated in transparently fake Iraqi Air Force markings so as to sustain the claim that Rashid Ali was a potent independent ruler. He was defeated militarily by the British and fled to Iran, leaving his German allies to fight on alone.