Eighty years ago the German campaign against the Jews gathers momentum 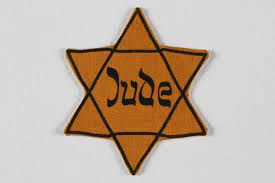 Jews in Germany and territories annexed directly by the Reich were ordered by the police to wear a yellow star of David as an identifying mark in public. This extended an ad hoc rules that had developed in Poland after the German invasion in 1939 and areas conquered from the Soviet Union after Barbarossa. The Nazis revived a practice that had died out during the middle ages in Europe.

Jews had been murdered by the German invaders since the opening of Barbarossa, but genocide got fully under way with the massacre of over 20,000 Jews found in the Ukrainian city of Kamianets-Podilskyi. Many had recently been expelled from Hungary. The killings were perpetrated by dedicated SS units (Einsatzgruppen) assisted by a battalion of regular police.

A showpiece of Soviet industrialization was sacrificed to frustrate the German invaders. The Dnieper hydro-electric dam had begun to produce electricity in 1932 and was the world’s largest outside the USA. It was blown up to stop it falling into German hands; tens of thousands of Soviet citizens were drowned in the flood unleashed by the dam’s destruction.

The Australian prime minister was practically forced to resign in a confused and obscure crisis that broke out following his return from several months in Britain. To some extent he was paying the penalty for his passive involvement in a series of intrigues against Churchill mounted by individuals as diverse as Lord Beaverbrook, the eternal schemer, and Lord Hankey, the former Cabinet secretary and now a minister. Stories that Mackenzie was being run as a replacement for Churchill are probably wide of the mark, but he seemed to forsaking Australian politics in favour of ambitions in London. The new prime minister was Arthur Fadden, whose Country Party, secured equal status to Mackenzie’s UAP in the governing coalition.