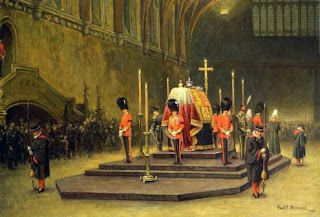 The final night of the lying-in-state was enhanced by a striking innovation. By one account it was the idea of Edward VIII himself and he certainly espoused it with enthusiasm. At around midnight he and his three brothers wearing ceremonial military uniforms took the places of the regular troops around the catafalque and stood guard over their father's coffin. It was a striking and moving act of homage to the dead King and it was recorded in a painting after the event entitled The Princes' Vigil: 12.15am, January 28, 1936. In 2002 the gesture was repeated at the state funeral of his daughter-in-law, Elizabeth, the Queen Mother with four of her grandsons, including the Prince of Wales, standing guard.