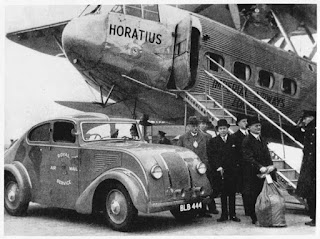 To almost no-one’s surprise Italy withdrew from the League of Nations in a very belated protest at the League’s entirely ineffectual sanctions imposed on Italy for the invasion of Abyssinia. The public announcement provided Mussolini with the opportunity for a theatrical speech in front of a crowd estimated at 100,000. In practice it was more of an affirmation of Fascist Italy’s ability to defy censure of its conduct by any other country. The move was instantly applauded by Germany which reiterated its determination never to rejoin the League however it might be reformed. For the couple of years that it was left to exist the League had dwindled into a talking shop for the non-dictator countries.

As the Japanese army tightened the noose on Nanking, the next Chinese city on its list, warships of British and US navies standing by on the Yangtse  to protect their nationals in the region came under fire from Japanese artillery on the river bank. The US gunboat Panay was sunk and the HMS Ladybird damaged with fatal casualties. In the context of the military operations under way these incidents were quite insignificant but they excited widespread interest and protest in the UK and US which rather monopolized newspaper attention. Probably unintentionally the Japanese had succeeded in focusing attention away from a vast atrocity that was about to be unleashed.

The well-known left wing Labour MP Ellen Wilkinson had a few eventful days. She had accompanied her party leader Clem Attlee on a mission to Spain to observe the Civil War, lending the small crumb of moral support to the Republican that the British cross-party policy of firm “non intervention” permitted. She flew back from Paris in a violent thunderstorm and her plane, Imperial Airways' Horatius,  was damaged by a lightning strike. Undaunted, she led the move to secure a second reading in Parliament for a bill to curb the grosser abuses of the hire-purchase industry the day after her return..