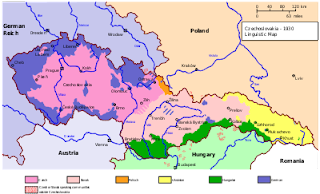 Konrad Henlein, the leader of the “Sudeten” German-speaking population of Czechoslovakia issued an extensive list of demands to the Czech government. It was immediately endorsed by Nazi Germany. The next flashpoint for a serious crisis in Europe was now abundantly clear. The presence of 3.5m German speakers in Czechoslovakia was an anomaly of the Versailles Treaty and few would have argued against the justice of improving their rights as a majority, but Henlein wanted full autonomy. More sinister, he wanted a right to “profess German nationality.” The Sudetenland had never been a political entity, it had always been part of Bohemian crown lands. The notion that Sudetens could be German citizens led logically to the incorporation of Sudetenland into Germany.

Britain too was in process of tidying up one aspect of the greater mess of the legacy of 1914-1918 with the signature of a treaty with Eire. Britain was to give up control of the three naval bases in southern Ireland which it had retained as part of the “Imperial defence” of Eire. Winston Churchill was one of the few MPs to oppose the move. It is an open question how much the loss of the Irish ports weakened the Royal Navy’s campaign during the Battle of the Atlantic. The sea routes around the south of Ireland were vulnerable to air attack from occupied France so few convoys were routed through the area requiring short range naval escort. Ireland also received £10m financial compensation and Neville Chamberlain presented to the Taoiseach Eamon de Valera the binoculars that had been confiscated from him when he surrendered after the 1916 Easter rising.

The head of the Zeppelin airship company Dr. Hugo Eckener visited the USA to attempt to negotiate the easing of the ban on exporting helium to Germany under 1927 Helium Control Act. Both the ill-fated Hindenburg and the Graf Zeppelin 2, now the only airship left in operation, had been designed to use the safe, inert gas. The Act had originally been posited on helium’s supposed status as a strategic resource which had disappeared in 1936. However, it was kept in force as an economic sanction in reprisal for the Anschluß even though Eckener was an anti-Nazi.  Graf Zeppelin 2 made a number of propaganda flights lifted by hydrogen but the era of the airship had come to an end.