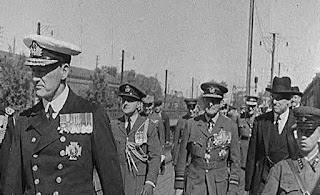 Clandestine contacts between a junior British minister, a senior British civil servant and Goering’s economic adviser, Helmut Wohlthat, were leaked in the newspapers. The most eye-catching feature was the supposed offer to Germany of a loan of £1bn, an immense sum for the day, to fund its disarmament. Other inducements were offered to encourage Germany to reach a negotiated settlement of its demands. Fortunately for Neville Chamberlain, the civil servant involved, Sir Horace Wilson his principal adviser on all topics notably foreign policy, could just claim that he was still the government’s Chief Economic Adviser, which sustained the fiction that he was merely discussing economic matters with Wohlthat rather than a political settlement. The Foreign Office had known nothing of the contacts, which were an attempt by Downing Street to pursue the appeasement of Germany by unofficial channels.

A delegation of British senior officers under Admiral the Honourable Sir Reginald Plunkett-Ernle-Erle-Drax was despatched to Moscow to discuss the terms of military cooperation with the Soviet Union in an apparent attempt to break the log-jam in the negotiations. The Soviet side had for some time insisted confirm commitment to a military agreement. What was immediately apparent was that these officers were relatively junior in status; the Admiral’s name was not merely ludicrous but advertised the fact that class considerations had not played a major part in determining his suitability for negotiations with a Marxist regime. The mission’s mode of transport was not publicised but was possibly even more significant. They went by a slow, merchant vessel which would take a week to reach its destination. Chamberlain did not feel any pressing need to conclude the negotiations.

The government made immediate use of the new powers it had been granted under the Prevention of Violence Act which had just been passed by Parliament to fight IRA terrorism. Six young Irishmen were deported summarily to Eire and moves were in hand to send more. It is unclear whether this hampered the IRA bombing campaign in any way. Railways stations in London were targeted, killing one man and injuring a number of other people. Visitors to the Palace of Westminster were also turned away unexpectedly.