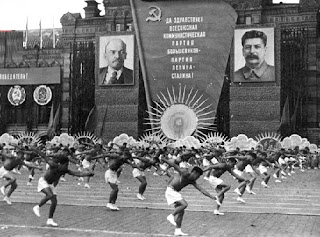 The Soviet Union’s Physical Culture day featured a political tableau along with the more usual athletic displays. Under the slogan “Ready for labour and defence" gymnasts in blue silk pants routed “German invaders" who goose-stepped on to Red Square in long field-grey overcoats. Soviet military skiers added another unseasonal touch. This affirmation of ideological dislike of Nazism might have helped mask the importance of the negotiations between Germany and the Soviet Union on a commercial agreement. With talks between Britain and the Soviet Union on an alliance against Germany still stalled, the danger that Stalin might seek an alternative had not registered.

William Ironside, a senior British general, was sent to Poland. The precise reason why he went is uncertain: informing the government of Polish side of the military situation that the guarantee to Poland had created was certainly part of it, but it might have been desirable to remove him from the London scene where he was judged, correctly, to be excessively close to Churchill. It might also have been intended to signal to the Poles a degree of commitment to direct military support in the event of a German attack. In reality Britain had no such plans, but the Poles (and perhaps the British public) might have been left with a false impression. Ironside was responsible for British forces overseas, which suggested that he would be given command of any troops sent to the continent in the event of war. The government was reassured by Ironside’s report that Warsaw did not want to provoke Germany, but ignored his accurate assessment of the military weakness of the Polish army.

President Roosevelt was defeated by 12 votes to 11 in the House Foreign Affairs Committee on the question of neutrality legislation. Afterwards the two Democratic members of the Committee who had opposed the President refused to budge and it proved impossible to win the Republicans over to any kind of compromise. The senior Republican on the Committee was William Borah, was the arch-isolationist William Borah of Idaho. Roosevelt abandoned the attempt to secure greater room for manoeuvre.

The scale of concern at the IRA bombing campaign on the mainland spurred the introduction of a bill giving the Home Secretary new powers. The government stopped short of outlawing the IRA but more because of practical consideration. The new bill offered drastic powers: anyone not resident in Britain for 20 years or more could be expelled or barred entry. The police were given new powers of search.