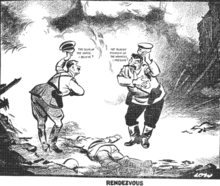 The first wartime Budget by the Chancellor of the Exchequer Sir John Simon hammered home to the British people that they were facing the full horrors of war. The basic rate of income tax surged from 5/6 in the £ (27%) to 7/6 (37%). This was the most notable of an increase in practically every form of taxation, including death duties. There was dark talk of introducing a capital levy, hitherto unknown in Britain. The increases would bring in an extra £107m that year and £227m in a full year. Defence spending of £630m at the time of the last Budget in April had reached £730m in July before the war had even broken out. Britain was in for a lean time fiscally but Sir John could offer the public the consolation that at least the pound sterling retained its value on the international currency markets whilst the Reichsmark was worthless.

What the British public was not told was that twenty German aircraft had bombed the Royal Navy ships at anchor in Scapa Flow in the Orkneys. Nothing better showed how air power had changed warfare that the inviolate base from which the Royal Navy had blockaded Germany throughout the First World War should be exposed to attack. No damage was done but the aircraft carrier Ark Royal suffered a near miss. German propaganda claims to have sunk her provided a cheap win for the their British counterparts. Three of Ark Royal’s Skua fighters had made the first confirmed British air-to-air kill by downing a Dornier Do-18 flying boat.

Germany and the Soviet Union celebrated their partition of Poland with a formal treaty which set down on paper the division of spoils and promised economic cooperation. It stopped short of a full military alliance but the two dictatorships were keen to flag how close they were. Their friendship had been built on one project of predatory expansion but could serve as the springboard for more to come. David Low's clebrated cartoon skewered how little the supposed ideological differences between the two regimes counted when selfish interests came into play. The notion that Communism provides the only consistent and reliable force to fight Fascism is only a later fiction that astonishingly persists today.  “Interference” by other countries – Britain or France – was openly decried. The next step for German diplomacy was widely expected to be some form of “peace offensive” now that the Anglo-French guarantee to Poland which had triggered the outbreak of war had failed entirely and could be consigned to the dustbin of history.