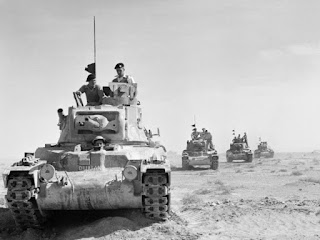 The Italian fortress town of Bardia fell to Australian troops in part of General Wavell’s Operation Compass push into Libya. The attackers were outnumbered almost three to one by the defenders but did have an enormous qualitative superiority in tanks. 27 Matilda MkIIs faced 13 M13/40 medium tanks and over one hundred near worthless L3 tankettes. The M13/40s carried a similar gun to the Matilda’s but it could not penetrate the Matilda’s armour. The attackers’ casualties were almost negligible but the Italians lost heavily and about 36,000 were taken prisoner. The Italian commander Hannibale “Electric Whiskers” Bergonzoli, who had promised Mussolini to fight to the last, and his three divisional commanders escaped. The commander of the last Italian post to offer resistance wore a British MC awarded to him when the countries were allied in the First World War. The attackers continued their drive towards their next objective, Tobruk.

Hitler’s intentions in the Balkans gave rise to ever-more feverish speculation. Hard information was almost entirely lacking but a generally southward movement of troops was a recurring feature. It was widely speculated that the Germans would invade Bulgaria, which had lagged its neighbours in acknowledging Nazi domination of the region. In the far South of the region bitter winter weather was slowing the Greek advance into Albania; the Greeks had also reached the limit of their supply lines through the rugged terrain.

President Roosevelt decided to remove Joe Kennedy as the US ambassador to London in a move that was widely seen as strengthening his support for Britain. Kennedy had been consistently and vocally pessimistic on Britain’s prospects. He expected a victory for Germany, with whose regime he was broadly sympathetic. He had never been a particular ally of Roosevelt, but the job had neutralised a potential opponent or rival. Before Kennedy’s replacement was named, it was announced that Harry Hopkins, the President’s friend who was a close to being his confidant as anyone ever got, was to visit London as his personal representative. This, too, was recognised as a pro-Churchill move.

Probably the most famous of the pioneering British female pilots Amy Johnson, who had first made her names as the first woman to fly solo from Britain to India, was killed in a flying accident. As well as her flying achievements, she had been president of the Women’s Engineering Society, dedicated to helping women pursue careers in a male dominated sector, but her private life had been unhappy with a failed marriage to a near-alcoholic fellow flier who was unfaithful to her. She had volunteered to join the Air Transport Auxiliary as a ferry pilot; one in eight of the service’s pilots were female. She had settle down at ATA and had been to First Officer. She disregarded warnings that the weather was dangerous and made an otherwise routine transfer flight in an Airspeed Oxford, twin-engine trainer. She was seen to bale out over the Thames Estuary in near freezing temperature. Her body was never found.