Eighty years ago, the most obscure sub-conflict of the war fizzles and dies 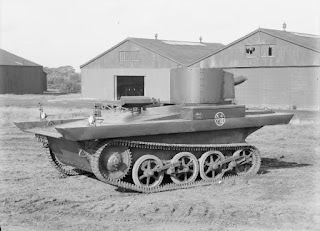 Arguably the least known sub-conflict of the Second World War came to an end when Japan pressured the Thai government into ceasing hostilities with the Vichy French regime in Indochina which had just begun.  The Thai army was equipped with British tanks including amphibious Vickers-Carden-Loyd light tanks, which were faced with antique French Renault tanks of First World War vintage. Vickers had been the best-selling tanks of the 1930s because of their low price; they had little else to recommend them. The Japanese calculated that a weak and biddable Vichy government was preferable to a powerful regional force with independent ambitions. Tokyo had little desire to see anything that might push the French authorities in Indochina into any kind of friendship with Britain. Thailand was awarded extensive territorial concessions and the conflict passed as a Thai victory.

The House of Commons select committee into the conduct of MP Bob Boothby in what was known as the Czech assets affair delivered its verdict and it was damning. His behaviour had been “contrary to the usage and derogatory to the dignity of the House.” The committee’s verdict was harsh; Boothby had not disclosed a personal financial interest in one aspect of the attempts to compensate holders of assets in Czechoslovakia who had lost out because of the German occupation. But the committee chairman was a committed Chamberlainite and thus no friend to an anti-appeaser such as Boothby. There was, though, no inclination to challenge the verdict in the House and Boothby accepted it with some dignity; he was cheered for his composure as he left the chamber. He resigned as a minister but remained an MP.

President Roosevelt’s Lease-Lend Bill that would provide Britain with massive assistance in the form of the “loan” of military material, passed its first hurdle when it was approved by the Foreign Affairs Committee. The next stage was its passage through the House of Representatives. As a concession to isolationist sentiment the bill had already been amended to restrain – albeit in limited and essentially symbolic fashion – the President from ordering the US Navy to escort  convoys carry the material. The British had already paid a full price. Sir Edward Peacock, a director of the Bank of England who was heading a mission to the US, confirmed what the Us side had already leaked: that British gold holdings in the US had already been liquidated, the sale of quoted securities was under way and ways were being found of realising unquoted investments. Britain was on financial life-support well before it was on military life-support.

After being trounced by British led forces in North Africa and the Greeks in Albania, Italian forces crumbled in East Africa in the face of only modest pressure from the British and allied armies. After being pushed back 100 km into formerly Italian territory in Eritrea, a projected stand by two divisions came to nothing. The invasion of Abyssinia in 1936 had been supposed to create a new Fascist Roman Empire but the enemy now standing near the gates of this jewel in Mussolini’s crown, the whole project was looking dangerously rickety.

General Wavell, the British C-in-C for the Middle East, paid a visit to Athens that became public. It betokened a huge escalation in the support that Britain was already providing to Greece in its fight with Italy. So far this had been limited to a handful of RAF squadrons, but sensing the danger from the build-up of German forces in the south Balkans, the Greeks had asked for more. They had driven the Italians easily back from their attempt at invasion, but knew they would face a sterner task if Hitler moved south to support his ally. The sudden death of the Greek dictator Metaxas heightened the sense of instability.

The tension between the Romanian dictator Antonescu and the anti-semitic Iron Guard Legionnnaires finally boiled over. Antonescu had been unhappy at the Legionnaires’ brutal robbery of the country’s Jews, more because of methods and blatant nature of than the fact of the crimes. There  was also tension between the Legionnaires and the German minority population who were prepared to outbid them in forced sales of Jewish assets. As relations between the official government and the Iron Guard reached boiling point, the Iron Guard launched a murderous pogrom in Bucharest and then seized control of the streets. This was described as a rebellion but it fell well short of an effective coup d’etat. The army was still loyal to Antonescu and decapitated the Iron Guard, killing hundreds of them. The Germans endorsed Antonescu’s move, not from any concern for the Jews, but because they wanted Romania to remain as stable as possible whilst Hitler pursued his greater ambitions in the region.