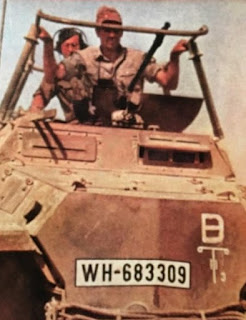 British commitment to the southern Balkans was signalled unambiguously when the Foreign Secretary Anthony Eden and the Chief of the Imperial General Staff, Sir John Dill, visited Turkey then Greece. The duo were rapturously received by the public in Turkey, which provided some consolation when they were told by their hosts that the country was far to weak militarily to intervene against the likely German attack on Greece. The Turks tried to save British face further by accepting that was supplies intended for them might be diverted to Greece. The meetings in Athens formally set the seal on the British decision to send troops to support the Greeks.

The British army had already encountered the Wehrmacht (and the Luftwaffe) in Libya, where the first elements of what was to become the Afrika Korps had arrived under the command of Erwin Rommel, then an unknown name to the British. Operation Unternehmen Sonnenblume (Operation Sunflower) was intended to rescue the Italians from the rout inflicted by Wavell’s Operation Compass. Even though only a single armoured regiment had arrived it was still able to make itself felt, scoring local successes against the desert army and bringing to a definite end the heady advance westwards since the new year.

Unfortunately for the Italians, their forces in eastern Africa were beyond the range of any German support and the British-led forces continued their remorseless advance. Facing minimal resistance, they captured Mogadishu, capital of Italian Somaliland, and a major port, which was of greater use to them than their enemies as it allowed even more efficient supply from India.

Stalin conducted a mild – by his standards – purge at the top level of Soviet government. Three members of the central committee of the Communist party were sacked, including Maxim Litvinoff, whose removal as foreign minister in 1939 had heralded the alliance with Nazi Germany. The gentler treatment of severe public censure for inefficiency (in his still undisclosed job) was meted out to Stalin’s former close and ruthless ally Lazar Kaganovich. Litvinoff and Kaganovich were both of Jewish origin so the moves fitted in with Stalin’s desperate anxiety to remain on good terms with Hitler. Kaganovich survived to die in his bed aged nearly 100 in 1997 just as the Soviet Union was disintegrating, the last of the old Bolsheviks and murderer of tens of thousands of innocent people.

The war was bringing immense changes to British society and the government introduce a measure that would have been unthinkable. No part of British life was regulated by a more anachronistic and ancient regime than theatres. Censorship was still exercised by an official of the royal court, the Lord Chamberlain, and the activity was still governed by an act of Parliament of 1843, which had the unique distinction of applying more or less according to where you were in the country; it was at its most draconian in London, Oxford, Cambridge and anywhere near a royal residence. The British Sunday with its near total absence of economic or cultural activity was also a phenomenon, which frequently baffled and enraged Continental visitors. It was thus doubly revolutionary when theatres, cinemas and music halls when the Home Secretary permitted to open on Sundays in industrial areas where workers might easily be on shift the other six days of the week. Equity was delighted but the still immensely powerful Lord’s Day Observance Society was appalled at this “unrighteous” decision.