Eighty years ago, an icon of Royal bagpiping goes to the bottom 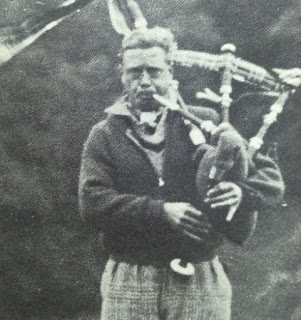 As Prince Paul, the anglophile Regent of Yugoslavia, twisted and turned to escape unremitting German attempts to bring the country into the Axis, his British friends came to his assistance to improve his freedom of movement domestically. For long the strong man of Yugoslavian politics had been Milan Stoyadinovitch, who was broadly friendly towards Hitler and Mussolini, although he was chiefly interested in his own power and was widely thought to entertain hopes of making himself dictator. Prince Paul had Stoyadinovitch arrested and handed over to the British army in Greece. He was then interned in Mauritius as (in Churchill’s words) “a potential Quisling and enemy”. Churchill insisted the Governor of Mauritius, “should be informed he [Stoyadinovitch] is a bad man …Food and comfort should be appropriate to the scale of a Colonel.” The British foray into internal Yugoslav politics did not help ward off the diplomatically inevitable. In spite of growing popular opposition, in particular amongst the Serbs, the prime minister and the foreign minister went to Berlin to sign Yugoslavia’s adhesion to the Axis, accepting the terms of the “Three Power Pact” without qualifications.

The British were driven out of El Agheila in Libya, the furthest point west reached the previous month by Wavell’s dramatically successful offensive against the Italians, by the newly arrived German forces under Rommel. The town was lightly held and of no particular strategic significance, but its loss was an evil omen that the easy days of success against the Italians were over. With British forces in the region ever more deeply committed to Greece, there was negligible prospect of a counter attack.

The Vichy government signed a decree launching the project of a railway across the Sahara desert. The plan had been around since the end of the nineteenth century. It was intended to link the French colonies in sub-Saharan Africa with those in Algeria and allow the natural resources of each to be shared, as well as symbolically cementing the parts of France’s African empire. It was a counterpart to Britain’s Cape-to-Cairo railway plan and presented to the colonists as emblematic of Vichy’s capacity for rapid decision-making in contrast to the Third Republic’s ineffectual indecisiveness. The bulk of the labour was to come from enslaved Jews from the North Africa colonies, who were subjected to conditions not markedly better than those in German concentration camps. Barely any of the line was successfully constructed.

Members of the top tier of British society might have shed a tear for HMS Rosaura, of which a  fair number had happy pre-war memories. She had been sunk by a mine in the Mediterranean, but previously had been the private yacht of Lord Moyne, one of the then immensely wealthy Guinness family who had been created a peer in his own right; she had been requisitioned by the Royal Navy at the start of the war. In 1934 Edward Prince of Wales had invited himelf on board for a three week cruise. The party he had brought with him included Mrs Simpson but not her husband. It was their first holiday together. The Prince had inisted on playing the bagpipes on deck into the early hours, but had been punished by a severe storm in the Bay of Biscay, which had terrified both of the couple.