Eighty years ago, the opening phase of the war in the south Balkans draws to a close 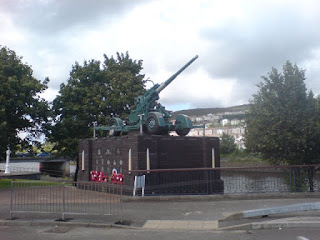 After a prolonged but ultimately doomed hesitation, the Bulgarian government bowed to the inevitable and allowed German troops into the country. The promise of territory to be seized from Greece and Yugoslavia was enough to make the Bulgarians accede to demands that they sign the Tripartite pact. This had little immediate practical consequence, but did signal that Bulgaria was aligned with the three main Axis powers. With Germany still formally allied to the Soviet Union, there appeared little risk for Bulgaria. German troops immediately entered the country in force, prior to attacking Greece on its southern border.

The British foreign secretary, Anthony Eden, fresh from his failure to interest Turkey in resisting the Axis, found a “changed and disturbing situation” in Athens. The Greek army had even begun its promised to a more defensible line. Eden’s response was to agree to practically anything the Greeks asked, thus committing Britain to full-scale military support.

The success of General de Gaulle’s Free French forces under, then, Colonel Philippe Leclerc in taking the Saharan oasis of Kufra in the south-east corner of Libya gave what was to become a painful reminder of the Italian weakness in the region and what might have been achieved if Wavell’s offensive in the north of the country had not been halted to allow intervention in Greece. After the victory Leclerc and his men took an oath never to lay down their arms until their colours flew over Strasbourg cathedral.   Three and a half years later, Leclerc was to make good this vow at the head of the legendary 2e Division Blindée in practically the final step in the liberation of France.

British commandos conducted very successfully a raid on the Norwegian Lofoten Islands. A number of small merchant ships were sunk, 3,600 m3 of fish oil was destroyed, a small number of German prisoners and rather more local Quislings were taken prisoner. The operation may have contributed to Hitler’s irrational fear that Britain would invade Norway, which led him to maintain an excessively large occupying force there, but the true motive was to boost British morale and satisfy Churchill’s yearning to attack the Germans somehow, somewhere. The most valuable dividend was the capture of the Enigma rotors of the Krebs, a naval armed trawler.

In the eastern Aegean the British had a far less happy commando experience, when 400 or so soldiers and marines tried to seize a small Italian held island, Kastelorizo, with the intention of installing a base for torpedo boats which were to challenge local Italian naval supremacy. The British had underestimated the scale of the response that the Italians could mount – notably in the air - and were driven off the island after a few days. The British admiral in command fell ill and had to be replaced by a ship’s captain. British casualties were light, which helps to explain why this “rotten business” – in the words of the overall Royal Navy commander in the theatre -  is not better known.

Swansea was the latest city to suffer severely from the attentions of Luftwaffe. With its important port and oil refinery the city was a promising target. The attackers had the benefit of electronic beam guidance so were able to find their target unlike much of the RAF’s bombing of Germany at this time. British night-fighters were ineffective. Swansea was bombed for three nights running and suffered around 500 casualties with most of the city centre being severely damaged. The inhabitants were rapdily consoled by visits from the King and the prime minister. It is one of the few cities to have built a significant monument to its defence from air attack.