Eighty years ago, the false dawn begins to fade 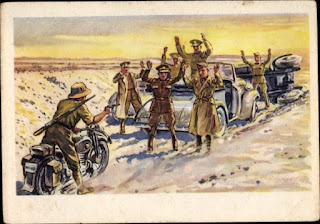 An optimistic observer might have thought that Britain was doing tolerably well in its war against Germany and Italy in the first months of 1941. But if a week is a long time in politics, it can be even longer in a war. A thoughtful observer might have been rethinking Britain’s prospects after the first week of April.

Winston Churchill had hailed the Yugoslavian coup d’etat, which removed the regime that allied itself to Germany and Italy, as a country regaining its soul. He little appreciated just how short a time it would have to enjoy its new status. Immediately after the coup Hitler had decided to treat Yugoslavia as an enemy and to launch a full-scale military attack. The codename for the attack Strafgericht (criminal or, literally, punishment court) gives a flavour of Hitler’s thinking. The assault began with a heavy air raid on Belgrade and the elimination of the poorly equipped Yugoslav air force. Land offensives were launched both against Yugoslavia and Greece, which encountered little significant resistance. German intervention in Greece to redeem Mussolini’s failure had long been on the cards. The bulk of the Greek army was on the Albanian border confronting Italy, which left the border with Bulgaria weakly held. The Germans attacked from Bulgaria. Large British forces had started to arrive in Greece but they had neither co-ordinated fully with the Greek army nor established a defensive line.

Hungary’s hopes of escaping full-blown participation in the war were a collateral casualty of Strafgericht. Pál Telecki, the neutralist albeit enthusiastically anti-Semitic prime minister, had tried to keep the country’s commitment to the Axis to a respectable minimum. He had signed a treaty of friendship with Yugoslavia and resisted German demands to let troops through Hungarian territory to attack Yugoslavia, but the army let them through anyway. Telecki was appalled at the national dishonour this involved and well knew that war would be a catastrophe for the Balkans. He shot himself and power devolved on Admiral Horthy, the Regent, who was far more friendly to Germany. Britain immediately broke off diplomatic relations.

The Afrika Korps's advance in Libya caught the British ill-prepared. They were forced to abandon Benghazi, which gave a major jolt to sentiment at home, grown complacent on Wavell’s stunning and easy advance against the Italians, and soon the port of Tobruk was under siege. Wavell, the theatre commander, lost confidence in Philip Neame in command of the desert army, and sent out General O’Connor, who had led the successful advance into Libya, to take charge. O'Connor persuaded Wavell not to remove Neame outright, creating a dual-command structure,  but in the confusion of the retreat both generals were  captured by a German patrol.

There was a crumb of comfort for the British in East Africa where they almost completed the reconquest of Ethiopia from the Italians. The British took Italian civilian women and children under their protection from vengeful Ethiopians, who had little cause to remember Italian domination with pleasure. The Italian commander, the Duke of Aosta, sent public thanks to the British general in a gesture from an earlier age of warfare, which would soon appear obsolete and antique.

After RAF Bomber Command had done little worse from high altitude than disturb the sleep of the crews of Scharnhorst and Gneisenau at anchor in Brest, Coastal Command tried its luck with a low level torpedo attack. One torpedo struck Gneisenau doing severe damage but the Beaufort aircraft which had delivered the attack was immediately shot down.  Flying Officer Kenneth Campbell, its pilot, was later awarded a posthumous Victoria Cross.

Kingsley Wood, the Chancellor of the Exchequer, delivered his second and most famous budget. It marked the full transition of Britain to a war economy. Under the influence of John Maynard Keynes, Wood's innovation was to follow a broad plan of economic management in contrast to the traditional accounting-driven exercise in balancing the government’s books. Wood’s principle was to ward off inflation by heavy taxation. Standard rate income tax went to 50% from 42.5% and for the first time more than half of the population were brought into the tax net by reducing tax free allowances. Before the war it had been almost a status symbol to earn enough to pay income tax. Some of the taxation was treated as compulsory savings to be repaid after the war. The Budget was well received in the press and on the Stock Exchange.

The mine workers’ union showed rather less solidarity with the government’s economic activities and began to position itself to extract monetary and political advantage from the war. It declared itself opposed to government direction of labour in the industry – miners were not free to move jobs without permission but were exempt from military service – unless pay rises and workers’ control were granted.