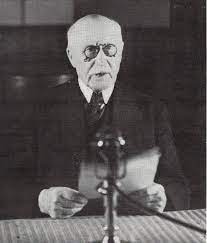 The army won the latest and crucial round in the struggle for Japanese policy. The navy faction which supported the prime minister Prince Konoe and wished to avoid war with the US was defeated.  Konoe’s overtures to the US had failed to yield worthwhile results; President Roosevelt stuck to his hard line. German success in the East further strengthened the army’s hand. The Emperor swung behind the army. Konoe resigned, clearing the way for General Tojo to replace him. It became a matter of time for Japan to go to war.

The German attack towards Moscow progressed, seemingly with remorseless success, but there were clear signs of military over-reach. Another two huge groups of Soviet troops were surrounded in the Vyazma and Bryansk pockets. Ultimately perhaps 0.5m would be taken prisoner, but in the meantime they fought on. This tied down over twenty German divisions in a battle of attrition, which weakened the thrust towards the Soviet capital.

The loathsome farce of the Vichy government’s campaign of vengeance on its predecessors descended further into unredeemed arbitrariness. Marshal Petain announced in a radio broadcast that by his personal decision, the former ministers and General Gamelin, who had been charged with criminal responsibility for France’s defeat in 1940 were to be imprisoned forthwith. He claimed an entirely artificial distinction between the judicial dimension of their pending trial at Riom and political  issues of national interest. The proceedings a Riom were to be a show trial worthy of Stalin; Petain spoke of the court's verdicts as though they had already been pronounced. One of the gaoled ministers, the Jewish Georges Mandel who had opposed French appeasement, would later be judicially murdered.

Arguably the most iconic figure of democracy in Panama, Arnulfo Arias, was deposed as President by a coup d’etat. It was put about that he was pro-Fascist, partly because he had been ambassador to Mussolini, but in reality he was merely excessively attached to the country’s own interests and resisted the influence of the police in politics. He had also given the vote to women.