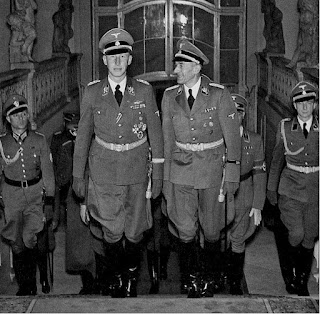 German occupied Czechoslovakia had become a battleground between the terrorists of the SS and the conservatives. The latter were represented by Konstantin von Neurath, an old style diplomat who had been replaced as foreign minister by Ribbentrop in 1938, and had been installed as Reich protector in Prague in a cynical atttempt to persuade world opinion that Czechoslovakia would be ruled in a decent fashion. Von Neurath did not endorse Nazi plans to obliterate Czech culture and conducted a soft-touch policy through Czech collaborationists. To discredit him the SS staged attacks, supposedly the work of the Czech underground. With the war against the Soviet Union under way, security in Czechoslovakia had assumed a new dimension. When the SS forced the issue, Hitler took their side and sent von Neurath "on leave", installing as his effective replacement Reinhard Heydrich, the master secret policeman, architect of the Holocaust and one of the most effective and fightening figures of Nazi Germany.

The German occupation of Kiev was soon followed by a large-scale massacre of its Jewish population. Some 34,000  Jews were taken to a ravine outside the town of Babi Yar, shot by SS Einsatzgruppen and buried in mass graves over the space of two or three days. It was the largest single slaughter of the Russian campaign although the site remained in use for mass-killings of other groups.

After a period of strategic indecision, the Germans launched Operation Typhoon, a direct thrust at Moscow, which the Wehrmacht staff led by von Bruchitsch had advocated for some time against Hitler's instincts. Perversely the huge success of the Ukraine campaign in which vast number of Soviet prisoners were taken - the greatest of the encirclements of the Barbarossa campaign - may have persuaded Hitler and the generals that the Red Army had been weakened beyond recovery and that the time was ripe to pursue an essentially political goal. The Soviet regime had made preparations to leave Moscow, so it is difficult to believe that it would have been in any way decisive if the city had fallen.

The Second World War created a number of short-lived states but the Syrian Republic has survived. It was proclaimed by Gerneral Catroux, de Gaulle's highest ranking supporter, as part of the multi-layered manoeuvrings in France's Levantine empire. In part, it was an attempt to allow Vichy officials to transfer their loyalty without having to recognise the Free French government as such. In part, it established an essentially French political entity in a British dominated area; Catroux tried to have Edward Spears, Churchill's man in the Levant, appointed as British ambassador to Syria, thus legitimizing its "independent" status. Bashir al-Assad's first predecessor was thus a Gaullist French general.

Operation Halberd succeeded in running a nine ship convoy from Gibraltar into Malta, the largest resupply of Britain's key strongpoint in the Mediterranean. Following the Axis occupation of Greece, Crete and Libya, Malta was Britain's only base in the central Medierranean, straddling Axis lines of communication but isolated and vulnerable. The escort by the Royal Navy's Force H included three battleships and aircraft carrier, which was enough to deter the Italian navy from a full scale attack on the convoy but there were sustained air attacks.

In a sign of the autarkic management of the British economic, female non-food  retail workers between 20 and 25 years of age ("shop girls" in the parlance of the day) were to be withdrawn from their jobs. They were not open to conscription in the formal sense but it was hoped that they would join the female branches of the armed services or undertake "other vital war work."