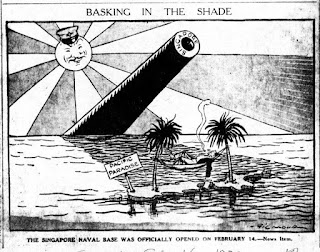 The professional head (Permanent Under Secretary) of the British Foreign Office Sir Robert Vansittart was moved to the newly created post of Chief Diplomatic Adviser. This was spun as a promotion but in reality he had been dismissed; all he could do was to write the prolix and rambling minutes that were his trade mark. He had benefited from the mis-placed support of Sir Warren Fisher, Head of the Civil Service, and had arguably been over-promoted. He was obsessively anti-German but was unable to persuade his political masters of the dangers posed by Hitler. His place was taken by Sir Alexander Cadogan who was far more professional and pragmatic but did little to resist Neville Chamberlain’s policy of positive engagement with Germany, now more usually called appeasement.

The British government finally announced that the new naval base in Singapore would open the following month after £9m of expenditure. It had been a political football for a number of years, but had finally been driven to completion as proof of Britain’s commitment to the defence of its Pacific possessions. The project was militarily flawed. Much of its defence was entrusted to the RAF which had lobbied remorselessly for the task on the basis of the air force’s supposed greater flexibility and cheapness. Singapore’s artillery defences pointed out to sea and gave no defence inland from which Japanese forces stormed the city five years later.

The BBC began to make news broadcasts in foreign languages. The first was in Arabic. This was the birth of the World Service which remains a gold standard for objective and unbiased news reporting. Ferocious battles were being fought in Whitehall over preparations for propaganda machinery to counter the efforts of the dictator states but this step which  excited little comment or controversy was to prove far more effective and enduring.