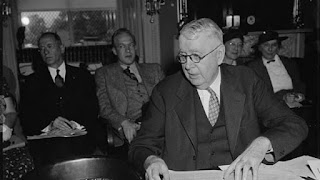 The strength of isolationist sentiment in the USA can but gauged from the fact that, when it finally came to a vote in Congress, a well-worn isolationist proposal was only narrowly defeated. Senator Louis Ludlow had proposed that the Constitution should be amended so that the USA could only declare war if this was approved by a national referendum unless it had actually been attacked. In the aftermath of the Japanese sinking of the USS Panay fears of war rose to a point that the Ludlow Amendment was brought forward. Ludlow himself was a nonentity who achieved nothing else but spoke for a powerful section of politicians and the public. President Roosevelt is supposed to have swung the Irish American vote away from its traditional isolationist stance and the “discharge petition” which would have made for a full-scale debate was only defeated by 209 votes to 188. Whilst this support was well short of the two-thirds majority that would have been needed to amend the Constitution the vote was another shot across the President’s bows. De facto the Ludlow Amendment was designed to impose permanent  neutrality - it is hard to imagine that its sponsors foresaw the Japanese attack on Pearl Harbour - albeit deeply impractical as a proposition. It served, though, as a shibboleth for the forces of isolation that kept the USA out of the Second World War until Pearl Harbour. Even had the Ludlow Amendment been passed Roosevelt would then have been allowed to declare war.

The Spanish Republican army achieved its immediate tactical objective for the major offensive launched just before Christmas of taking the town of Teruel. The occupation of Teruel gave the Republicans a propaganda victory but little else. It had come at the cost of high casualties on both sides in fighting conducted in exceptionally bitter winter weather. More important, it was anything but a major strategic victory. The Nationalists still had ample resources available with which to counter-attack. The Republican strategy was flawed: in a war of attrition Franco held all the cards.

The British White Paper on Palestine proved to be a remarkably feeble exercise in prevarication that succeeded in nothing but antagonizing both sides. The government was accused of “oscillating” between one side and the other: shifting between apparent concession to one and then reversing the policy. The idea of partition was not – as had been expected – entirely discarded but the there was no thought of forcibly separating the Jews and Arabs, which the Jews saw as the only way to make partition work.