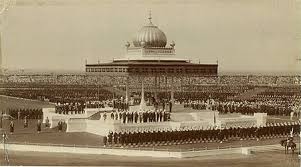 Unconsciously King George VI sounded the death-knell of the British Empire in India with the announcement that he would not be travelling there for a Coronation Durbar the following winter. The formal proclamation of the British monarch as Emperor or Empress of India had been the cornerstone of Britain’s constitutional position in the sub-continent. It was a prime example of a great tradition that only happened once. There had been Durbars for Victoria and Edward VII but they had not been present in person. The only King/Emperor to attend his own Durbar was George V in 1911 at apogee of the Empire's might. The ceremony was a byword for magnificent lavishness and was held in a huge, specially built amphitheatre. Edward VIII had dragged his heals over any thought of participating in a similar ceremony, as he did in all things concerned with India. As Prince of Wales he had resisted his father’s wish for him to visit India. His brother naturally took a more dutiful approach, but the huge cost of such an event and – not that London admitted it was was consideration – Indian nationalism combined to force postponement, for ever as it turned out. The political establishment had pulled out all the stops to ensure that his coronation as King of Britain succeeded so as to give a stamp of full legitimacy to his uncomfortable and unexpected succession but the tank had run dry. George was the last sovereign to bear the proud Ind. Imp handle but the global cataclysm that lay ahead meant that he would also lose it.

The London government’s scheme for very limited political autonomy for India had never managed to get up and running; it had not managed to fit enough wheels to ensure stability and traction. Even those that had been fitted were now in process of coming off. Two of the state government’s established under the new legislation in Bihar and the United Provinces resigned because they could not over-ride the “reserved” powers of the London-appointed (white) governors and order the release of political prisoners.

Meanwhile in Central Europe Adolf Hitler was operating an informal empire with a good deal more ruthlessness and success. Kurt Schuschnigg, the Austrian Chancellor, had visited him at his mountain retreat, the Berghof, to try to stabilize relations with Germany. He found himself peremptorily instructed to reconstruct his cabinet to enhance Nazi representation. In particular Arthur Seyß-Inquart, not yet a party member but deeply sympathetic, was to be appointed as security minister with full control of all police. Schuschnigg and Austria's President Miklas struggled to demur but they were confronted by an insuperable force.