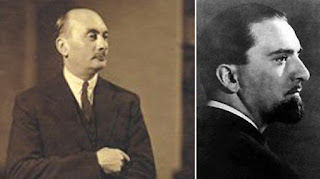 Anyone who might have doubted that Prime Minister Neville Chamberlain was fully in charge of British foreign policy was presented with unambiguous evidence that they were wrong. Foreign Secretary Anthony Eden resigned suddenly and, despite a gentlemanly reluctance to go into the gory details on Eden’s part, this was obviously because they disagreed on policy. Eden was not opposed to appeasance as such - in fact it was he who came up with the word to describe British policy he was just  deeply suspicious of Mussolini’s trustworthiness, but such doubts counted for little with Chamberlain. Chamberlain imagined he could play Italy and Germany off against each other by pursuing constructive diplomacy towards both powers. He imagined he held a trump card in the form of British recognition of Italy’s conquest of Ethiopia. Mussolini, naturally, wanted this but never intended to play any real price. More insidious than disagreement on policy was Chamberlain’s habit of going behind Eden’s back, using a weird and wonderful array of unofficial emissaries to put his case. These ran from his half-brother’s widow to the legal adviser to the Italian embassy in London Adrian Dingli, Maltese born but Italian educated, who was run by the sinister figure of Sir Joseph Ball, the ex-spy who hovered in the shadows of Chamberlain’s premiership. Chamberlain's (other) eminence grise Sir Horace Wilson saw the flaws in Eden's personality and was not sorry to see him gone. By the accidents of history, Eden's resignation set him on the path to his own disastrous premiership almost twenty years later. Perhaps it is significant that the two strongest contenders for the title of worst twentieth century British Prime Minister  were Conservatives who disagreed on a point of foreign policy.

The Spanish Republicans’ calamitous offensive in the East unwound visibly and spectacularly as Franco’s Nationalists retook Teruel, the worthless goal that had lain at its heart. In a foretaste of the murderous squabbles amongst Republican leaders that were to come, the local commander Valentino Gonzalez (el Campesino) blamed Enrique Lister, another Communist, of having intentionally withdrawn forces so that he would be captured. In the event he escaped. The battle of Teruel cost both sides heavily in men and materiel; the Republicans could not make these losses good; the Nationalists could.

The Kuomintang armies of China pursued their strategy of trading space for time and gradually withdrawing in front of the advancing Japanese armies, better armed, disciplined and equipped. The comprehensive defeat of a tentative counter-attack amply demonstrated the wisdom of this strategy. It barely slowed down the Japanese advance on the Yellow River.