Nazism does grandiose and it does back-stabbing 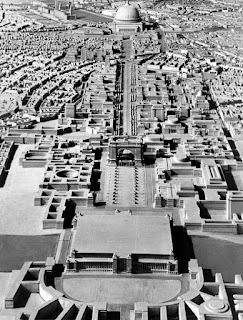 The early phases of Hitler’s consolidation of power in Germany had been greatly smoothed by the unflinching support of Werner von Blomberg one of the Wehrmacht’s most senior officers. He had taken Nazism away from its radical pretensions by insisting that the paramilitary SA be curbed. The ensuing “night of the long knives” massacre involved the murders of the SA leader Ernst Röhm, who also presented a small challenge to Hitler, and General Schleicher, one of Blomberg’s rivals in the Wehrmacht. Blomberg rose to be commander-in-chief and war minister, along the way implementing anti-semitic measures in the Wehrmacht and making officers swear a personal oath of allegiance to Hitler. His standing earned him the enmity of Herman Goering in the remorseless Nazi internal struggle of all against all. The trigger for his downfall was his marriage on 12 January 1938 to a lady who proved to be have been a pornographic model and prostitute. Blomberg refused to annul the marriage making his resignation and disgrace practically inevitable. His passing was not greatly mourned by his fellow officers in an apt illustration of how well Hitler could succeed in nurturing internal rivalries to do his work for him.

There was some wholesome relief from all this sordid manoeuvring when Albert Speer, Hitler’s tame architect, publicly unveiled plans for a gigantic remodelling of the centre of Berlin. A new 5km Prachtallee (avenue of splendour) was to run to the Brandenburg Gate. The centrepiece was to be the Volkshalle, a colossal hall, vaguely modelled on the Pantheon in Paris (but rather larger at 315 meters high) with space for 180,000 people to listen to the Führer speak. No construction was ever undertaken but some preliminary ground clearance works were performed free of charge by the RAF and the USAAF.

President Roosevelt sought the approval of Congress for a huge expansion of the US armed forces. The main feature was a 20% increase in the US Navy, concentrated on building up its capital ships. This was manifestly a counter to Japanese naval rearmament and labelled as a defensive measure. The speech gave a jolt to the more deluded Japanese politicians who imagined that the increase in the Imperial Japanese Navy had somehow remained a secret. The step had been in the air for some weeks and attracted little opposition as the main focus of US isolationism was to avoid becoming embroiled in Europe’s problems whilst the Pacific was seen as a legitimate US interest.