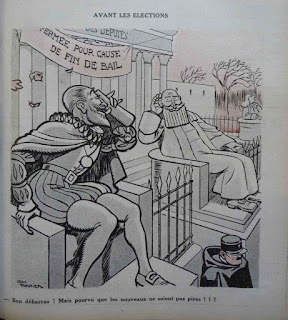 Closed due to termination of lease. Good riddance, provided the next lot isn't worse

The well-worn British joke about the restaurateur complaining that his best French waiter had had to go back to France “because it was his turn to be Prime Minister” might have been coined in the 1950s but it could equally have applied to the late 1930s. Camille Chautemps had led an exclusively Radical government since January but they had too few deputies to give him a majority in the Assembly. The Socialists and Communists refused him the support he needed to obtain wide-ranging powers to manage the economy by decree, which he believed was necessary to fund rearmament. He announced his intention of resigning after a mere seven weeks in office.

Goaded beyond endurance by German inspired or organized measures to bring Austria under Nazi control, Chancellor Schuschnigg announced a referendum seeking approval of his policy of national independence to be held the following Sunday. The measure caught Berlin unawares and there was no  immediate, public reaction.

Possibly aware that his public was becoming jaded with endless tales of mundane plots with foreign secret services, Trotskyism and industrial sabotage, Stalin’s chief prosecutor, Andrei Vyshinsky, introduced an entertaining tale of poisoning worthy of the Borgias into the current show trial. Expert medical testimony and, naturally, the confession of the defendant  himself was introduced as evidence that the once-feared head of the NKVD Genrikh Yagoda had murdered four people by a mixture of over-prescription of drugs and brutal exercise regimes. The victims included Maxim Gorky and his son. Gorky was too well-respected an old Bolshevik to have been judicially murdered in the ordinary course of business, so the availability of Yagoda’s confession offered an elegant solution to explaining the sudden and still unexplained deaths of the pair. For good measure Yagoda also confessed that he had planned to take over the Kremlin and install himself as Führer.