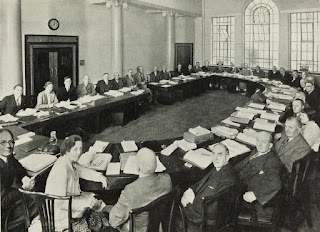 Leon Blum’s second and final Front Populaire government was embattled from the start. Gentle proposals to intervene in the Spanish civil war were emphatically rejected by the parties of the right and just as loudly trumpeted by the Communists. Blum remained committed to rearmament and finally took the plunge that he had avoided during his first government: announcing the introduction  of exchange controls so as to cope with the inflationary pressures of a debt-financed weapons programme. The Senate rejected Blum’s finance bill and withheld powers to government by decree. Mass strikes in the engineering industry added to his woes.

The Anschluß had pushed Britain too in the direction of accelerating rearmament. But even though the government enjoyed a solid and dependable majority coupled with an ineffectual and divided opposition, it was not going to go to the lengths of sacrificing conservative financial policy. A sound, market economy was considered to be the fourth arm of defence. Instead the representatives of the engineering and other employers most likely to be involved in the programme and the Trades Union congress were summoned separately to Downing Street to be told to behave nicely together because it was important for national security. No-one was savage enough to mention the dread term “dilution”, the expansion of the available labour force by bringing in relatively unskilled workers to perform tasks reserved for highly paid skilled (or more efficiently unionized) workers.

The Japanese invasion of China began to lose steam. The city of Xuzhou was taken from the Chinese but the key purpose of the operation failed. The Chinese army units broke out of the thin crust of Japanese troops around the city and regrouped in safety on the far side of the Grand Canal. In itself the city had no strategic value; only the full elimination of the Chinese troops would have made a serious contribution to further progress. The Chinese army was still far too weak to expel the Japanese but Japan was now facing a stalemate in which it could hold major cities but had too few men to destroy all Chinese resistance.