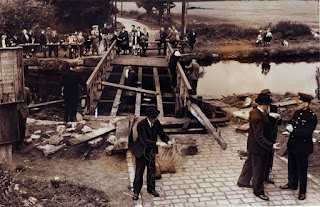 After years of inactivity the IRA launched a bombing campaign in mainland Britain. A more militant faction had recently taken control of the organization and wrote to Lord Halifax, the Foreign Secretary, “declaring war” on Britain. The grandly named “S Plan” was intended to damage vital infrastructure but the manpower and technical skill available to the IRA were not up to the job. The campaign started with five near simultaneous explosions in London and Manchester. One man was killed and two were injured, all civilians. There was extensive damage. One of the targets was bridge on the Liverpool and Leeds Canal.

The extreme left wing Labour MP Sir Stafford Cripps launched a one man bid to drive the party into a “popular front” with the Communist Party, supposedly to provide more effective opposition to Chamberlain’s government. After his proposal to the National Executive was soundly defeated, he appealed to branches directly in defiance of the rules. His only notable supporter on the National Executive was Ellen Wilkinson MP. Neither he nor she was controlled by the Communist Party but they naively imagined that it was motivated by the same high-minded considerations as themselves. The party set in train the mechanism to censure Cripps formally.

Chamberlain and Halifax held their long heralded talks in Rome with Mussolini and the other Fascist leaders. Quite what Chamberlain hoped for beyond generally improving relations and promoting appeasement is unclear. Nothing concrete was achieved but Chamberlain basked in his genuine popularity. The conversations were considerably more agree able than those Chamberlain had had with the German leaders, but afterwards Mussolini privately expressed his poor opinion of his visitors, “These men are not made of the same stuff as the Francis Drakes and the other magnificent adventurers who created the Empire. These are after all the tired sons of a long line of rich men and they will lose the Empire.” Hardly had the British party left Rome when the Italian press resumed its clamour for France to cede territory in North Africa to Italy. The British had avoided Italian attempts to secure their "mediation" in these claims, which would have given them the appearance of legitimacy, which they lacked entirely but neither did they offer the kind of vocal support which might have sent a clear signal to the Fascist powers. Chamberlain did not want to put at any risk his dream of appeasement.