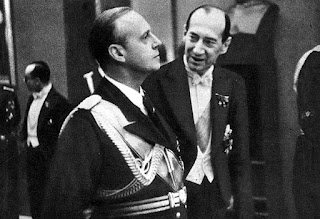 The Polish Foreign Minister Colonel Beck paid an official visit to Munich for talks with the Nazi leadership including Hitler and Foreign Minister von Ribbentrop. Poland was still in process of finding its place in a Europe that had been reshaped by the Czech crisis in September. Poland had been happy to seize Teschen from Czechoslovakia whilst it was helpless in the face of German aggression but had not entered into any long term deal. Poland had its usual quota of Balkan territorial claims in which Germany might provide further support. Germany for its part would have liked Poland to join the Anti-Comintern pact, more as a loose alliance of non-democratic states than out of any particular fear of the USSR. But Poland as a Versailles creation had been granted much old German territory which the Reich ultimately wanted back.

The vice was closing on what remained of Republican Catalonia. In the north it was mainly Franco’s own forces and in the south the attackers were predominantly Italian. The Italian advance stalled until Spanish troops were detached to help them make the key breakthrough. The Littorio division, then an infantry formation but later to become famous as an armoured division in North Africa, took Borjas Blancas a key route centre which left the Republican army a single axis along which to retreat to Barcelona. Never was the pretence that the Italians fighting in Spain were volunteers more hollow.

The last of the conservative old guard faded away in Japan as Prince Konoe resigned as prime minister, making way for the overtly nationalistic Hiranuma. Debate on foreign policy was dominated by the question of how far Japan should ally itself with Nazi Germany. For all his nationalist background, Hiranuma recognised that Japan was already over-stretched in China took a conservative stance on the narrow question. The drift towards uncontrolled expansionism, though, faced one less obstacle.

The Bell Laboratories displayed in Philadelphia one of the precursors of the age of electronics. The Voder could – just – synthesize human speech electromechanically. From breaking speech into discrete component sounds, Bell had moved to reproduce and combine these at will. It did not have an authentic human accent and its first phrase as was – fittingly – “patience is necessary.” It was the first step to digitizing speech.