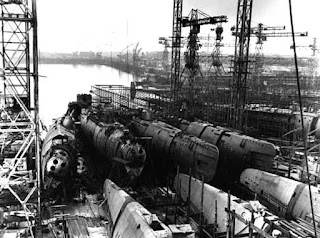 Germany gave notice that it intended to exercise its rights under the 1935 Anglo-German Naval Treaty to increase its strength towards the limits set by the treaty. Of most interest was what the Kriegsmarine might do about its U Boot force. Under the treaty it was allowed full parity with Britain in submarine strength but had accepted that it would not exceed 45% of Royal Navy submarine tonnage unless “exceptional” circumstances arose. A Royal Navy delegation flew to Berlin at short notice to clarify the position. Germany claimed that it wanted to increase its U Boot fleet by a maximum of 10%. Applying this to the Germans' own figures for the to navies’ respective submarine strengths this implied a rise to 47% of the British total. A discreet silence was maintained as to what exceptional circumstances might have prompted the move.

The New Year’s Honours list provided a handy guide to who was well in with the Chamberlain government, in particular the men who were deemed to have had a “good” Munich crisis. Top scorer was Sir Nevile Henderson, Britain’s enthusiastically appeasement minded ambassador to Grmany, who was promoted from KCMG (“Kindly Call Me God”) to the top rank of that order of chivalry, GCMG (“God Calls Me God”).  Two more junior Foreign Office officials received the unusually high distinction of promotion to Commander of the Bath: William Strang, who had accompanied Chamberlain on his first mission to the Berghof and drafted the “Peace for our time” declaration and Frank Ashton-Gwatkin, who had steered Lord Runciman’s mediation mission in a solidly pro-German direction. The former First Sea Lord, Lord Chatfield, a consistent advocate of appeasing Mussolini, received the Order of Merit.

The Governor the Bank of England set off for Berlin on what was supposedly a private visit to his German counterpart, Hjalmar Schacht President of the Reichsbank. It was a threadbare pretence. He had seen Schacht in London a couple of weeks before. Even though he had no appointments with anyone else, it was widely recognised that he would be discussing political as well as economic matters. Norman was deep in the confidence of Downing Street, notably Sir Horace Wilson. After the unseemly interruption of Kristalnacht, high level contact between was set to resume between Britain and Germany.