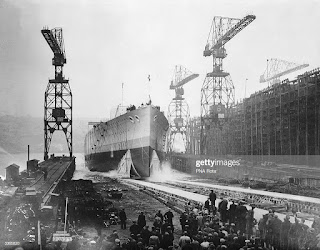 Fiscal conservatives quaked in their boots as the Chancellor of the Exchequer sought authorisation to double his borrowing powers to £800m to finance Britain’s rearmament programme. It had only been in 1937 that the original figure had been set. Spending for the next three years was projected at the astronomic figure of £1.17bn on the armed forces with the cost of air raid precautions coming on top. The reaction in the City was muted to say the least.

In proof of what all this money was being lavished, Britain’s first battleship for 17 years was launched on Tyneside. King George V was the name ship of her class and her first sister, Prince of Wales, would soon be launched too. It all seemed an appropriate response to the launch of Nazi Germany’s Bismarck the week before. The KGV’s were a somewhat flawed design with a quadruple and a twin turret forward and a quadruple aft, dictated by difficulties in gun development. Both the first KGVs fought against Bismarck. The Prince of Wales was ineffective in the first phase of her sortie in which she sank Hood  but King George was one of the force that sank the German ship a few days later.

Far more pacific forces were in action elsewhere in British government. The ambassador to Germany, Sir Nevile Henderson, made an unusually heartfelt speech, pleading for understanding between the two countries, before the Deutsch-Englische Gesellschaft (Anglo-German society) in Berlin. He spoke of the absolute identity of interests between the two nations and his desire to build on the foundations created at the Munich conference the previous September. It was his first major engagement after returning from a long leave.

Steps were in hand to achieve precisely this goal. It was announced that the British trade minister, Oliver Stanley accompanied by his junior Rob Hudson, were to visit Berlin for talks about promoting trade between the two countries. This was manifestly to be the prelude to a wider rapprochement. The ground was being prepared by Frank Ashton-Gwatkin, head of the Foreign Office’s economics section. Ashton-Gwatkin was a vocal advocate of friendship with Germany and had strongly supported Sudeten German claims as number two in Lord Runciman’s mediation mission to Czechoslovakia during the crisis of the previous summer.