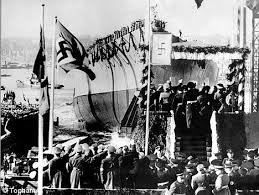 In brilliant sunshine (“Hitler weather”) Germany’s largest battleship ever was launched by Hitler in the company of the entire leadership of the country. The Bismarck was named after the founder of the Second Reich and clearly intended to emphasise the continuity of the two Reichs and to extend the reach of the Third. The intervening Weimar Republic could be skated over in silence. She was christened by the Iron Chancellor’s grand-daughter Dorothee von Löwenfeld. Her displacement supposedly respected the (by then obsolete) treaty limit of 35,000 tons but in reality exceeded it by a wide margin. There was a moment of concern during the ceremony when she initially failed to move down the slipway as the chocks were knocked away but she did. Some brave souls (probably mainly foreign journalists) allowed themselves the joke that the notoriously bulky Herman Goering had been obliged to give her a push to get her going.

Pope Pius XI died at the age of 81. His papacy had begun in early 1922 and he had the difficult task of steering the Catholic church through the age of Fascist dictatorships. He had signed concordats with both Nazi Germany and Fascist Italy. By 1937 he had become so affronted by Nazi breaches of the Concordat that he published in Germany under conditions of great secrecy the encyclical Mit Brennende Sorge denouncing these breaches. In the last weeks of his life had drafted an encyclical in response to the Nazi Crystal Night pogrom Humani generis unitas (The Unity of the Human Race) denouncing racism. It was never published.

It was officially announced that Sir Horace Wilson would succeed Sir Warren Fisher as Official Head of the British Civil Service when Fisher retired in October at the normal age of 60. In practice this formalised the position that had held good since Chamberlain took over from Stanley Baldwin as Prime Minister in 1937. Wilson was Chamberlain’s intimate adviser and confidant. He had far overtaken Fisher, who had been instrumental in getting him the job at 10 Downing Street in 1935, in terms of real power. Wilson ruled the Civil Service with a rod of iron, meting out punishment to anyone who failed to support the policy of appeasement. Fisher had protested strongly but privately at the abandonment of Czechoslovakia the previous autumn which made his position more or less untenable. Fisher awarded himself six months pre-retirement leave so the handover actually occurred faster. Wilson kept the small office next to the Cabinet Room at Downing Street which was the true locus of his power and shuttled between it and the far more imposing office in the Treasury.