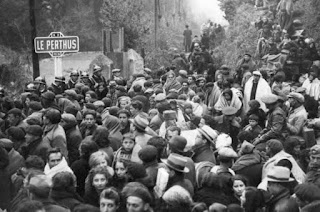 Stalin’s Great Purges in the Soviet Union drew to a close although, of course, there was no formal announcement. The first slight indication of change was ambiguous: the inauguration of a “discussion” of proposals to alter the rules of the Communist Party, the nearest thing that existed to a constitution. These were to be put before the Party’s 18th Congress due in March. Under the existing rules a Congress was to be held every other year but as five years had elapsed since the last one, even formal obedience had been suspended as Stalin murdered hundreds of thousands of people. The launch of previous “discussions” had served simply as a trap to entice individuals foolish enough to entertain opinions of their own to advertise the fact and thus volunteer themselves for liquidation. On a more concrete level, the powers of the political commissars in the Red Army were reduced. They remained in place, co-equal with the operational commanders, but they lost the right to expose senior officers to “open” criticism from junior ranks, naturally directed by the commissars themselves. Stalin’s slaughter of perhaps four fifths of senior officers had gravely weakened the Red Army to an extent that some western statesmen, notably Chamberlain, thought it had lost any value as a fighting force.

In testimony to the Military Affairs Committee President Roosevelt affirmed his commitment to supporting the democracies of Europe. By one account he said that France was the USA’s frontier. It was a resounding response to claims that exports of warplanes to Britain or France somehow weakeed the USA. He was also painting a picture of the Fascist dictatorships as the military enemies of democracy in far more vivid colours than the appeasers in Britain and France could ever contemplate. Predictably Roosevelt was assailed in the German press.

Six divisions of the Spanish Republican army performed their last service by protecting the border crossings into France as a huge tide of refugees fled from Franco’s Nationalists in what came to be known somewhat euphemistically as the retirada (retreat). In total about half a million people entered France in the largest mass movement into the country ever. The authorities were entirely unprepared for the influx and most of the displaced  suffered miserable conditions. Male refuges were held in squalid internment camps. For some it was so bad that they voluntarily returned to Spain where many suffered the full brutality with which France treated his erstwhile opponents.

There was a happier moment elsewhere in southern France as the authorities in Cannes formally renamed the Square des Alliés as the Place Neville Chamberlain as part of the festivities of la semaine Franco-Britannique in recognition of his having saved Europe from war at Munich five months earlier. I would be most grateful if any reader has a photo of the relevant street-name plate or details of subsequent changes in name.