Eighty years ago, Marshal Petain sets off for Vichy by way of Burgos 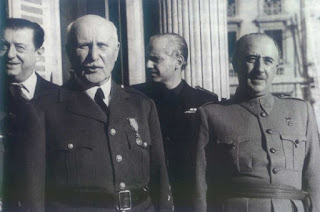 Madrid still held out against Franco’s forces but the Spanish Republic was in its death agonies. Its President Manuel Azana resigned and was not replaced during the few weeks of existence that were left to it. Britain and France did not wait for the fall of Madrid to recognize Franco formally as the ruler of Spain with his capital at Burgos. France’s choice of ambassador was hailed as a diplomatic master-stroke in establishing a strong French position with the new government to counter Italian and German influence. Except for being 83 years of age and never having been a diplomat, Marshal Pétain was the ideal candidate. He was nominally a staunch Catholic and social conservative (his extensive adulteries were conducted discreetly) and had commanded the French forces fighting alongside the Spanish army in the Rif war against the insurgent Berber leader Abdelkrim. Franco, then still only a colonel, had received the Légion d'Honneur on Pétain's recommendation. France and Spain had used chemical weapons aginst the Berbers. This was the first step on the political path that took Pétain to the headship of the Vichy government in 1940.

The head of the British foreign Office’s economics section, Frank Ashton Gwatkin, received a warm welcome in Berlin in his mission to prepare the way for the ministerial trade delegation announced a few days before. He saw both von Ribbentrop, the foreign minister, and Marshal Goering, probably the second most powerful man in the Reich. To the promoters of the policy in London it looked as though appeasing Germany by economic means was off to a winning start.

The spending estimates for the Royal Navy were announced at a figure of £148m, 18% up on the previous year’s as part of Britain's huge rearmament programme. As well as destroyers, escort vessels and other mundane warships, there was proof that the British sense of proportion had not been lost. The figure included provision for a new Royal yacht to replace the Victoria and Albert built at the turn of the century and near the end of its useful life. Her operational swansong had come two years before when she carried George VI for his Coronation Fleet Review. To head off any accusation of frivolity, it was announced that her successor would be able to operate as a hospital ship in wartime. In the event other priorities intervened and Britannia was not to be built until 1954 albeit still notionally capable of medical duties.

One of Belgium’s claims to fame in recent years is having spent a year and a half without a government. In 1939 it established a record of another kind with a government that lasted a mere five days between being sworn in and resigning from office. Prime Minister Hubert Pierlot failed to garner sufficient support to vote through a severely deflationary budget but later redeemed himself sufficiently to head the Belgian government in exile.

The Soviet Union's great purges had come to an end but there was to be a final tail piece to the era of trials for sabotage and treason. Voznesensky, a young radio operator in the Arctic pleaded guilty to interfering with the radio traffic of missions to locate the “Soviet Lindbergh” Levanesky, who vanished on a flight across the Pole to the USA in 1937. In a sign of the changed times, Voznesensky’s defence counsel was actually applauded by the public, which would have been suicidal at one of the great show trials.