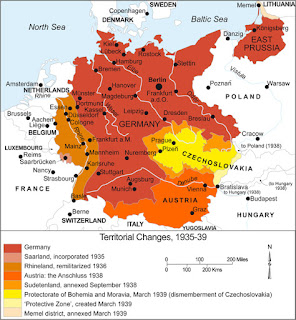 The horrified reaction to his feeble initial response to the Nazi occupation of Bohemia persuaded prime minister Neville Chamberlain that he needed to do something rather more resolute. The British ambassador was recalled from Berlin and Chamberlain took the opportunity of a long-planned speech to the Birmingham Conservatives to take a far tougher line with Hitler. The speech was broadcast in Britain and the US as well as into Germany, in translation. He asked the rhetorical question whether tearing up the Munich Agreement betokened a move to dominate the world by force. Britain, the Commonwealth and France were united to meet a challenge. He also brought himself to mention the plight of the Jews, which had previously been a taboo topic.

The speech was well received but the excursion into the more practical world of diplomacy that Chamberlain made next failed to translate the apparent new-found resolve into an effective means of facing down Hitler. He proposed a four power agreement with France, The Soviet Union and Poland to “consult together” should Hitler make any further moves. It would have required extensive and skilful diplomatic preparation to persuade the Poles to enter into any kind of agreement with the Russians and, such was Chamberlain’s haste to roll out his initiative, that none was made before the proposal was made public.

Hitler followed up his coup in Bohemia by bullying Lithuania into the ceding Memel (Klaipeda in Lithuanian) which had belonged to Germany before the First World War after being originally seized by Frederick the Great.  Since then it had become extensively Germanised and was an autonomous province of Lithuania. Together with the Sudetenland it had featured prominently in the lists of offences against self-determination by German people of which Hitler complained. Having thoroughly reneged on his claim that the Sudetenland had been his last territorial demand, he had no reason not to move on to Memeland. It had little strategic value to Germany but it bordered the isolated German enclave of East Prussia on whose western border lay the Danzig territory which was widely expected to be its next target. The annexation sent a signal to Poland that a move on Danzig and the corridor would not be long coming.

At the AGM of the Courtaulds textile company the Chairman ushered in a new, grim future for Britain. Courtaulds and ICI were setting up a factory to manufacture the new wonder synthetic fabric, nylon, which had just been patented and launched by DuPont in the US.