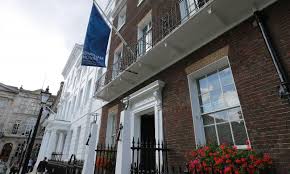 The British Foreign Secretary, Lord Halifax, made a much-heralded speech on foreign policy in the august atmosphere of the annual dinner of the Royal Institute for International Affairs at Chatham House. It was broadcast live to Britain and the USA. The bulk of what he said and his turn of phrase carried the message that Britain would resist further aggression by Germany and would fight if necessary. Nonetheless Halifax held the door open to negotiations in stating that British policy rested on “twin foundations of purpose”, explaining at length resolve to hold Germany in check but hinting at a desire to “to remove misunderstanding and reach a settlement.” The Times which was a regular mouthpiece for appeasers, headlined Halifax’s dual policy. The message to Hitler was thus a mixed one.

The IRA bombing campaign on the mainland continued. There were four large bombs all aimed at banks in central London and a number of post boxes were damaged by incendiaries. 17 people were injured, two seriously. The attacks were made in daytime and appeared to be intended to cause casualties. Madame Tussauds was also attacked with incendiaries and a number of waxworks were damaged. The IRA had just been banned by the government of Eire (as the Republic of Ireland was then known) but it is unclear whether there was any connection.

In China the Japanese maintained their blockade of Tientsin. The arrival of British warships offshore did nothing to slacken their zeal. A British subject, the honorary agent for New Zealand,  was put through the unacceptable indignity of a strip search and kept naked for fifteen minutes whilst at least a dozen foreign women passed through the check-point. A glimmer of hope arrived in the form of a Japanese agreement to discuss the issues involved (including the handover of the wanted Chinese) in Tokyo.