Eighty years ago, a low profile King completes the work of a high profile Prince of Wales 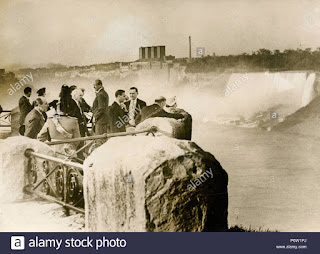 King George VI and Queen Elizabeth arrived on US soil from Canada over the bridge at Niagara Falls. It was a momentous event: the first time a reigning British sovereign had set foot on the former colony of the British crown. The historically minded observer might have spotted an odd parallel. George’s elder brother, then Prince of Wales, had made the most high profile of his several visits to the US in 1927, when the “Peace Bridge” across the same river had been opened. Unknown to all but the Prince’s private secretary, the British Prime Minister, Stanley Baldwin, who was also on the tour, saw enough of Edward to confirm his fears that Edward’s flaws were too deep for him to have much chance of succeeding as King. Baldwin did not brutally throw Edward off the throne when the crisis over Mrs. Simpson arrived in 1936, but he did not struggle that hard to keep him. George’s visit to the US was extremely well received and helped prepare the ground for the Anglo/US alliance that was to become so crucial three years later. In his understated fashion, George completed vital work that his elder brother had begun.

Sir John Simon delivered to the House of Common the statement he had promised when the scandal over the Bank of England’s transfer of the Czech gold to Nazi control exploded. It showed him at his lawyerly worst: ingenious, hypocritical and downright dishonest. He had discovered, he informed MPs, that the Bank of England could have no idea of the true ownership of the gold in the first place as the accounts concerned were sub-accounts of the Bank for International Settlement’s (B.I.S.)account and there was no way of discovering who the underlying owners might be. Simon gravely declared that the Protocols of 1930 and 1936 prevented the government from giving instructions to the Bank of England – then still a private company – on this point. When it was pointed out to him that officers of the Bank of England sat on the board of the B.I.S., Simon claimed that they were not representatives of the British government. In reality, the Governor of the Bank of England was one of the dominating forces of the B.I.S., as well as a close ally of Sir Horace Wilson, the prime minister’s closest adviser.

Connoisseurs of the world of British diplomacy would have been struck by the despatch to Moscow of William Strang, head of the Foreign Office (FO) Central Department. He was not going as a plenipotentiary, merely to help the ambassador, Sir William Seeds, with the negotiations with the Soviet government. This gave a clue as to the extent of the difficulties the negotiations were facing in the shape of  Soviet obduracy and deep reservations by the London government on the whole process. It was Strang whom Chamberlain had accepted as a travelling companion on his first visit to Hitler during the Czech crisis, clearly someone who could be trusted as a safe pair of hands in an environment of mutual distrust between Downing Street – deeply suspicious of the Soviets – and the FO – far more committed to facing down Hitler.