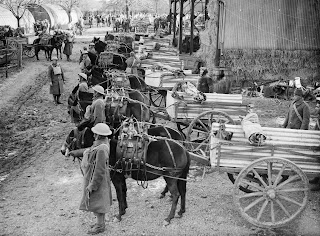 Flushed with its success in the Battle of the River Plate, the Royal Navy received another boost to its morale when the submarine HMS Salmon encountered a flotilla of German warships on a mine-laying operation in the North Sea and attacked them. Her torpedoes damaged two cruisers: Leipzig very severely and Nürnberg rather more slightly. In an excess of enthusiasm the navy reported that one of the cruisers had been sunk, but had to retract the claim the following day. Notwithstanding the propaganda embarrassment two significant Kriegsmarine units had been put out of action for some months.

The British Expeditionary Force in France suffered a prime ministerial visit when Neville Chamberlain arrived after a hot and uncomfortable flight; to his great irritation,  imaginative newspaper reporters reported that he looked extremely cold on landing, but that might just have been his personality. He met military commanders from both Britain and France and inspected troops without generating much enthusiasm. He complained to the distinguished French novelist André Maurois, who was working as a newspaper correspondent, of his parliamentary difficulties; he had just had to defend the government’s uninspired handling of the war in a secret session of the House of Commons. The challenge had not been serious but it served as a reminder that Chamberlain’s conduct of the Phony War was not that of a war leader committed to military victory. This was further underscored by the fact that the BEF reported its first fatal casualty, Corporal William Percy, since its arrival soon after the outbreak of war in September.

As if to offset the public impression that very little was happening except at sea, extensive coverage was given to the participation of troops from the British Empire. The first of many Canadian troops arrived in Britain although they remained there and were to see little action until the disastrous Dieppe raid in 1942. The first elements of the Indian Army to arrive in Europe were actually posted to France: mule transport troops. The claim that this was “calculated to impress the enemy” might have been made tongue in cheek. Mule transport was to play a vital role in Burma after 1942 and in the Italian mountain campaigns of after 1943 but it was something of an anomaly on the western front. To complete the picture of imperial solidarity, the first Royal Australian Air Force squadron arrived in Britain.